'Michael and Michael' Had 'Issues' On Web, Now Comedy Central 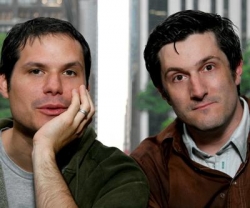 Comedians Michael Ian Black and Michael Showalter have a few things in common. They share the same name with some of the greatest music artists of all time like Michael Jackson, George Michael and yes, Michael Bolton. Bolton. In fact, aside from being comedy writers, the hilarious duo are also actors. Indeed they are best friends in real life, but when it comes to their debut on Comedy Central, they might just kill each other.

Why? Because that would be @#$!ing funny that’s why.

Based off their widely popular web series on CollegeHumor.com, The Michael Showalter Showalter, the good folks at Comedy Central has picked up seven episodes of their upcoming sketch show called Michael and Michael Have Issues, which is set to hit your living room tubes this July.

“This new hybrid series from Michael Ian Black and Michael Showalter brings their distinctive take on two comedic standards that will be an outstanding addition to Comedy Central’s line-up,” said Lauren Corrao president of original programming and development.

This won’t be the first time that longtime friends Black and Showalter have popped up on the network. Both of them previously appeared in episodes of Comedy Central’s cop-spoof show, Reno 911, and the network’s stand-up show Comedy Central Presents. Black was also co-wrote alongside Simon Pegg in the 2007 film, Run Fatboy Run, and Showalter wrote the 2005 comedy flick, The Baxter, where he also starred with Elizabeth Banks and Michelle Williams. Black also co-founded the sketch comedy troupe The State while still at NYU.

Much like the duos’ gut-busting sketches on CollegeHumor.com, Black and Showalter will be confronting their insecurities, issues and jealousy towards each other along narratives of each episode. From turning the show into a huge frat fest to kissing a teenage writer’s ass who will be doing a story on them for a high school newspaper, this upcoming TV series will slap viewers senseless with raw and unfiltered comedy that made their web series so popular.

“Michael and I are thrilled to be on Comedy Central doing we what we do best — making doo-doo jokes,” said Showalter. “I wanted to call the show ‘Michael Showalter Sucks Starring Michael Ian Black,'” said Black.

While waiting anxiously for Michael and Michael Have Issues this July, you now have plently of time to check out The Michael Showalter Showalter which are still available at CollegeHumor.com.