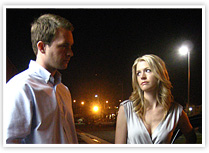 Everyone has their deepest and darkest urges in life that they wished they had fulfilled. It may have been that missed opportunity, where one could have experienced the most mind-blowing thrill, shock and sexual experience in their lives. However, instead of satisfying their desire, they just went along with their daily lives and chose the most common path-to move right along.

But what if you’re given another chance to relive that one moment in you’re life-that one moment where you could have taken the chance to make that leap of faith. The one moment, where it made your heart beat so fast that it could have jumped out of your chest, or where you felt so alive that everything else around you felt so surreal. Well, in the web series, Pushing Twilight, you could be in that moment once again-if you’re willing to take the risk.

Winner of the IFC/ Red Bull After Hours Web Series Challenge, Pushing Twilight pits a group of people, consisting mostly in there 20s, against their unfulfilled fantasies and urges that had passed them in their lives. In the middle of the huddle stands an orator, known as “The Host” played by D. C. Douglas (appeared on E.R., 24 and more) embodying a shadow of mystery-as he becomes the catalyst to their darkest dreams. In the first episode, the enigmatic persona tells the group, “You’re all here for the same reason”, as the scene shows every profile. “Something, in your life, needs change.”

And the show’s focus grows on that concept of change. According to the show’s official site, “Red Bull and IFC called upon the amateur filmmaking community to pitch us their pilot or trailer for a web series that explored the concept of ‘after hours’”- the time where most folks break free from their employer’s shackles and receive the opportunity to go about their own way. And what you would do after that typical “long day at work”? Would you simply lie on your couch and do nothing for hours in order to compensate for those tedious times, or would you take the opportunity and fulfill that daring change in your life? Pushing Twilight gives you the open door to make the latter choice.

Created by director Steve Sprinkles (director of the Best Film for 2006 at the National Film Challenge, Aw Crap! It’s A Musical) and screenwriter Stuart Chait (writer of A Night with Edgar and director of Insignificant Others), the series taps into the world of longing desires and insecurity of living that only a few would dare to uncover and more importantly, take the chance and pay the price for the experience.

Pushing Twilight currently has seven episodes, which are all available at IFC.com.