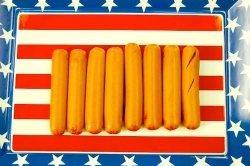 Last month I wrote about my excitement about wieners after I saw the trailer for The Quest for the Golden Hot Dog from 60Frames. This week 60Frames delivered it’s first of four servings of the show, and I’m not disappointed.

The world of the competitive eating seems such a rich subculture for comedy, I am surprised the studios have yet to jump on the idea. Already watching the first episode, I’m dreaming what these smart, funny comedians could do with a film budget as opposed to a micro-one. (How about a pudding-wrestling half-time show at an International Federation of Competitive Eating Championship event with a Borat-level punk on real competitors?) Sigh. A girl can dream.

Right now, the show feels small, and confined as we meet the competitors in a world that, until now, was dominated by real-life world champ Koboyashi. However, the viewer can easily forgive the micro-budget feel when watching the comedy chops showcased in Episode 1. Miki Ann Maddox is beyond enga 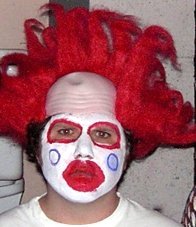 ging as Jen Chang. You watch her even when she’s just in the background. Demorge Brown is also a stand-out as the Black Bomber who’s just dropped his rap record, Ice Cream Wins Again is about to drop. Plus, stroking a hot dog shaped trophy is undeniably funny.

Show creator Micahel Busch points out some of the more subtle moments of comedy that make the episode worth viewing more than once. “My favorite parts in this are things like Liz licking her hand after fist-bumping Hungry Hungry Hipster, and Jen Chang hiding behind the blinds,” he says.

As far as what to expect in future episodes, Busch says, “more eating.” Right now, Busch and 60Frames have presented us with a pretty darn good dog, but I’m still excited to be rewarded with some relish, pickles and onions.