Rev3's 'PixelPerfect' is Back After Fans Revolt

It turns out fans can in fact save a show from the web series axe. After a brief production hiatus last October, graphics wizard Bert Monroy graces the digital canvas once again in a brand new episode of Revision3’s web series, PixelPerfect. Thanks to the show’s loyal audience and huge demand, PixelPefect is now back on track to bring the latest tips and tricks in Adobe Photoshop and Illustrator—complete with a neon sign.

“[Revision3] knew that PixelPerfect had a lot of fans, but we were blown away by the show’s strong, devoted and loyal audience,” the company said in their news blog announcing the show’s triumphant return. PixelPerfect is a weekly web show where digital artists and Photoshop Picassos learn the advanced ropes in graphic design with Photoshop Hall of Famer Bert Monroy. Since September 2006, Monroy has hosted over a hundred episodes and delivered tons of helpful hints in sculpting the finest digital art.

However in October 27, 2008, Revision3 announced that “tough staffing decisions” had to be made and in result, a few of the company’s shows had to end—Internet Superstar,  and PixelPerfect. But “through a flood of e-mails, tweets, IMs and every other imaginable form of communication short of carrier pigeon,” from the show’s devoted audience, the web welcomes Monroy back with open arms. 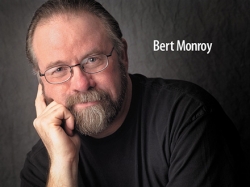 In the show’s latest installment (above), Monroy picks up his stylus and taps into the new features of Adobe’s latest Photoshop CS4. Product manager John Nack joins Monroy in looking into the new program’s functions such as broader Bridge options, interface improvements and much more. Although more episodes are in the works, fans must ensure the longevity of the series by spreading the word among friends and increasing its subscriptions, or else they may need to invest in an army of carrier pigeons for its third coming. But with its latest episode, devoted followers and Monroy’s expertise, it won’t be going anywhere.

PixelPerfect hits the web every Monday on Revision3 along with other fantastic shows for the rest of the week. The series can also be found in iTunes and is supported by nVidia, GoDaddy, Netflix and more.