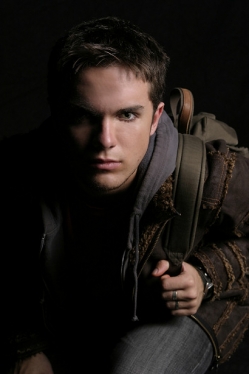 It looks like Thomas Dekker is trying to become the sci-fi series poster boy. First his jaunt as the cheerleader’s not-so-gay best friend in Heroes, recently the iconic John Connor in Terminator: Sarah Connor Chronicles, and the lead in this summer’s greenscreen-heavy sci-fi web series IQ-145. The series completed its 12 episode season in August, before Bebo picked it up for a re-release this fall.

Created by Billy Dickson (One Tree Hill) and Chad Cooperman (Heroes: Destiny) IQ-145 is a story about Nate Palmer (Dekker) who is recruited by a secret organization to help search for his father’s last experiment, a stolen nano-micro-co-processor chip, but will soon discover that it is he that is the experiment.  In his journey he is helped by his judgmental partner Beth (Linsdsey McKeon), his school friend Jen (Amber Brook Wallace), and their boss Jake Berringer (Brad Rowe). And in case you didn’t figure it out, the title IQ-145 refers to having a level of IQ that is qualified as genius, 145.

Each episode begins with a spoken narration by Nate, usually centering around his past, thoughts, or experiences. These are usually overlaid with a montage of various characters at various points in their work. Running about 5 minutes a piece, episodes feature heavy visual effects and production work.

At first glance, IQ-145 is an eye opener. The effects are so eye popping that your subconscious begs you to click over to Best Buy and order that Hi-res 30 inch LCD monitor so you can experience this series in all it’s visual glory. Actually, in every technical aspect, this series is top notch. The production team knows it’s got muscles and is flexing it at every opportunity. Not only is a penthouse apartment a penthouse, but it is set to a beautiful metropolis cityscape with helicopters and search lights flowing by. Every scene from a police station, to a park, to a lobby, all appear to be green screened and green screened exceptionally well.

With the production and effects so strong, what also works exceptionally well is immersing the viewer into the IQ-145 universe. The geek in everyone will go nuts with all the heads up computer interfaces, beautiful skylines, and fantastic attention to detail in every scene.

Alas, despite all the stellar visuals IQ-145 has a weakness: its story. The narrative is complex and dense. Nate’s monologues are so especially thick that they tend to cause more confusion than clarity. The pacing of the story is especially frustrating, the slow playing scenes lend themselves to enjoying the slick looking art direction, but leaves a fewer antsy to get the show moving. In the sci-fi genre we’ve come to expect some intense 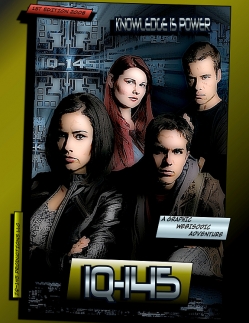 action scenes and/or big climactic moments, but in IQ-145 these beats are generally regulated to smaller character moments that are in themselves very unfulfilling. When you partner this with an overarching story that literally drags you end up with a series that is beautiful to watch, but hard to get through.

IQ-145 also rocks a very robust web destination at www.iq-145.com, complete with cast info, a director’s blog by Billy Dickson, a very slick looking graphic novel, cast interviews (including an extensive nine part interview with Thomas Dekker) and High Definition streams of all 12 episodes to date. The website is definitely worth checking out. Like the series, it does an ample job of user immersion. Given the HD streaming of it’s episodes and ease of clicking from one to the next, it is the best place on the web to watch IQ-145 in it’s entirety. If you get confused, there’s a pretty active fan community to fill in some of the holes.