It all started back in October when we came across a few videos teasing out an upcoming web series called Hobbit House (see sizzle reel below). Little info existed on the series and the creators were AWOL. So we poked around the web and before we knew it found ourselves chin-deep in a bizarre internet conspiracy called Wonderglen.

There are dozens of pieces to this puzzle, and we’ll try to give an overview, though some you’ll just have to investigate yourself if that’s your thing. Even a cursory look around leads you back to a quirky production company website called Wonderglen Productions. From there, you can’t help but notice a conveniently placed “Employee Login” box that has the user name and password already entered. You click “submit” of course, and are taken into an active and robust company intranet, complete with internal staff messages, notes from production meetings and unreleased videos created by the company.

The fictional duo heading up this bumbling production outfit are Aidan Weinglas and Pieter Voorhees (both of whom have fictional Facebook and LinkedIn profiles.) Notably missing are IMDB profiles for these self-proclaimed veterans of TV and Film, but those are a little tougher to fake. The Variety ad knockoff was pretty decent though.

The maze of related web sites is a humorous supporting cast in this story, like Wonderglen employee hangout Brennigan’s Hole, “the only Valley pub/bar with its own coin-operated shower.” A number of the staffers at Wonderglen are on Twitter, surprise surprise, including CEO Aidan, though with only a modest following. Some other sites in the mix for your perusal: Youranauthor.com, pinoypower.ph, www.askuswhereyourqisare.com and www.drdeanpayne.com.

And then there’s James Franco, adding an angle of Hollywood legitimacy that couldn’t really be ignored. He records a faux tribute video to “legendary” producer Aiden Weinglas. A number of online press outlets ran with it, trying to figure out just who or what is behind all of this. Videogum got sucked in, calling it “a little bit exhausting.” So did USA Today, Very Short List and AdRants who likened it to the “glory days of viral wonderment.” There was some speculation by commenters that this was just a viral PR stunt for Franco’s upcoming role as beat poet Allen Ginsberg in Howl, coming out in spring of next year. This turned out to be a dead-end however. Other theories centered around JJ Abrams, who gave us the Slusho rouse behind Cloverfield along with the mindjob that is LOST. But still, nothing stuck. 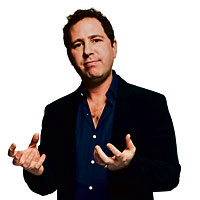 After working our sources, we’ve confirmed that Ben Karlin, former Daily Show producer and co-creator of The Colbert Report, along with partner Will Reiser and their team over at Superego Industries are behind Wonderglen. Karlin stepped down from his positions on the two Emmy-winning shows to form Superego back in summer of 2007 and landed a development deal with HBO in the process. Karlin also co-wrote the #1 bestselling America, the Book

and edited the satirical newspaper The Onion. Despite Karlin’s involvement, much of the content for the videos and the sites is apparently written by SF-based sketch comedy crew The Kasper Hauser Comedy Group.

In the end, there isn’t one massive film or TV project behind it all, as many had speculated, but rather just a very intricate (if not somewhat jenky) way to rollout a comedy site that will be “a launch pad for an endless amount of absurd, bizarre, hilarious content.” While Wonderglen succeeded in roping in a few eager online sleuths, the mystery never really hit mainstream fascination along the lines of the early lonelygirl15 conspiracy, which racked up millions of video views before creators Miles Beckett and Greg Goodfried were outed.

For Wonderlgen, the James Franco video, even with the decent press buzz, only amounted to just over 10,000 views to date. From the onset, the offbeat characters were credible only on the surface, and once you read their rantings it becomes pretty clear you’ve entered the world of fiction. Now that the cat is out of the bag it remains to be seen what actual entertainment comes out of Wonderglen. From our sources, we got this early quote from Karlin before a release goes out next week:

“There is no model for what it is we are trying. Which is exciting, but it also feels like we are in Jamestown circa 1610,” says Ben Karlin. “We may very well successfully colonize a new world or, we could starve to death because we didn’t bring enough salt.”

Will the minions keep up the in-character babble now that the wool is lifted? I guess we’ll have to wait and see. And somewhere along the line we’ll hopefully get a nice salty little web series out of Hobbit House.