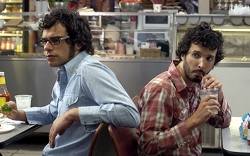 According to an official post yesterday on the Flight of the Conchords channel on Funny Or Die, the first episode of Season 2 of the quirky HBO comedy will premiere on the humor site on December 17th, almost a full month ahead of its network launch in January 2009. HBO had announced a second season for Flight of the Conchords in August 2007 with a premiere set for 2008, but then delayed the launch until sometime in 2009.

The Emmy-nominated television series about a pair of hipster Kiwi musicians trying to make it big in New York found a strong cult following on the tube and online, but never achieved mass scale audience. The show’s hipster irreverence and entrepreneurial spirit, fueled by a snarky, inside joke style, make the show a great match for web audiences—web darling Kristen Schaal made a splash with a popular blog for her character Mel.

Nevertheless HBO, whose tentative entry into the web market with a smattering of under-incubated projects like Runaway Box, HBOlabs’ Hooking Up, and the acquisition of a small equity stake in Funny Or Die, is not leveraging the web to the the advantage of its branded shows, but is rather placing safe bets—and this stunt with Flight of the Conchords reeks of a market test for a series they are unsure about, or at best another half-assed attempt to generate buzz to reach their television audience.

HBO just doesn’t get it on the web, which comes as a surprise to me because it’s a studio that has been a leader in premium branding and content development. Les Moonves, CEO of CBS, said “the future of internet content is as a lab for the network.” I disagree. HBO should stop seeing the web as simply a vector back to television, but a powerful and relevant end in itself where more fully engaged audiences can be cultivated.