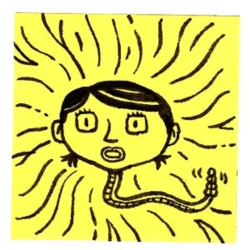 Lexus’ L Studio unveiled a new web series this month and once again they’ve scored with a tasteful, funny, and well-produced gem. Starlee and Arthur Review brings us straight into the lighthearted banter of humorists Starlee Kine and Arthur Jones as they review, well, life. The pair explores everything from disaster movies to the internet. With simple but often hilarious illustrations underscoring Kine and Jone’s light, insightful banter, the show has a delightful highbrow tone, as you might expect from people who have the uber-cool job title of “humorists.”

In the pair’s review of Lost, Arthur extrapolates the plot by recalling Gilligan’s Island, since he confesses he has never seen the show. He says of the smoke monster “Spoiler alert! There’s a fog machine on the island. Someone needs to unplug it.” Some episodes are more successful at being funny than others—it appears the show works best when the humor is more precise. Talking about the concept of fun, Jones and Kine are less dead-on than in their pop culture critiques. 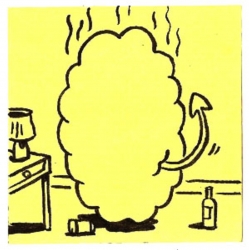 It appears the show developed from Kine and Jone’s Post It Note Reading Series, in which writers shared stories while Jones’ sharpie-on-post-it illustrations were projected behind them. Astute and amusing observations are made even more giggle-provoking when paired with Jones’ lo-fi illustrations. In “Last Words,” they muse about Winston Churchill’s last words. After uttering “I’m bored with it all,” Churchill went on to live nine more days in silence. Jones’ illustrations of a bored Churchill on his deathbed refusing to speak so he didn’t waste his legendary parting words are priceless.

Although L Studio, with its extremely complicated and slow loading interface, may not know how to pick their web designers, they clearly know how to pick their web series creators. If Kines’ voice sounds familiar, it’s because she is responsible for one of the most memorable This American Life segments in the past few years, ‘Break Up Song.’ For those intelligentsia who geek out for Found Magazine and public radio, this is your show. Starlee and Arthur Review is smart web TV for grown up folk.