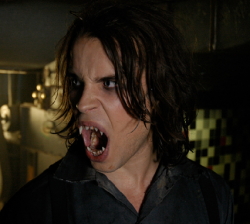 A few weeks ago we got you up to speed on The Dark Path Chronicles, the newest web series from FEARnet and Sam Raimi’s Ghost House Pictures, who last collaborated on the 30 Days of Night series, Blood Trails and Dust to Dust.  The first two episodes premiered on FEARnet yesterday – why FEARnet waited until nearly a week after Halloween to release a horror series is beyond me.  The site also features a making-of video, a behind the characters featurette and writer/director Mary Lambert’s (Pet Semetary) blog.

Slapped with a TV-14, The Dark Path Chronicles pushes the boundaries of its rating in the first episode with a gnarly vampire attack.  My problem with the series stems for its heavy reliance on horror themed rock music, an element that deters from the overall show. The music, performed in this episode by Boston-based rockers Junius, is way too distracting and, combined with the shaky camerawork and quick cutting, makes it seem more like a music video than a web show. 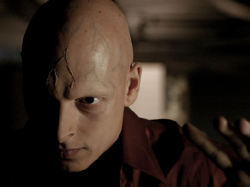 The second episode (below) delves more into the mythology of the series’ vampires, as Father Raymond, played by mixed martial artist William Laureano (I hope this casting indicates some sick fight scenes in upcoming episodes), explains the ways one can become a vampire.  Having emerged from his grave, Jurgen describes his transformation from Nazi to vampire, and calls for Samantha to join him.  As Samantha draws nearer to Jurgen, Enid sips from a jar of blood in her goth club like lair.  The same problem I had with the first episode is evident here, as the filmmakers concentrate mainly on the music from electronic/hard rock outfit Prophet 7:13, making the show too much like a music video.

Considering the talent behind it, I’m willing to give The Dark Path Chronicles a few more tries. Hopefully it will shift away from the heavy music video influence and focus more on the story.