This is part 3 of a multi-part review of the initial lineup of Strike.TV’s original web series.

Joe & Kate’s tagline sums it up: ‘awkward and honest moments in the everyday life of a couple’. So short and sweet it leaves you wanting more. At one minute in length it’s as awkward and funny as a premature ejaculation, as Kate returns from the bathroom to the bedroom and Joe proceeds to inquire about how a vagina works. No wonder the series is sponsored by K-Y Jelly.

Written and performed by Joe Kelly and Kate Purdy this show could become a cult hit if it sticks to its premise and is marketed well. Just left of being totally real, Joe and Kate seem like amateur actors, and no offense if they’re not, because it’s exactly what works for the show. There’s a comfort to them that makes me think they might actually be married as Kate uses a teddy bear to explain the anatomy of a woman’s nether regions and Joe nods thoughtfully asking slightly confused questions that I have to admit, I don’t know the answer to, but would like to.

And that’s just it. It’s totally relatable, from the writing, to the acting, to the simplicity of the setting in the bedroom before sleep time. Please please please let them stick to the short-and-sweetness, the uncomfortable comfort and the things you always wanted to know but were afraid to ask and this fun little show will speak to millions of couples the world over.

(Spoiler alert) This is good, but I have to admit, I was bored in the first twenty seconds. Really? A talking head? Well, that’s how this fictional confessional begins with Timothy Dalton speaking directly to a camera, recording a suicide note to his wife, Carolyn, in which he tells her she’s been completely cut from his will. 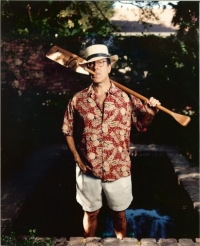 Dalton’s performance is subtle and genius as is to be expected, though the confessional is a little lackluster as it’s written, and I can’t help but think their lavish life could somehow be funnier. However, it’s really in writer Steven E. de Souza’s (Die Hard, Tomb Raider) plotting, where the story works and brings on some hearty laughs as Carolyn, played by Joanne Whalley, enters and proceeds to shoot Dalton, the performances of which, on both actor’s parts, are hysterical.

I’m not totally sure what to expect from this anthology series, which is supposed to bring us new episodes culled from random internet posts collected by the mysterious ‘Unknown Sender’ (all obviously fictional)—a somewhat wonky description of the series—but nevertheless, I like this one and can only hope they are at least this good if not better.

[Ed. Note: We know you guys don’t always agree with our reviewers’ opinions, so please post a comment to let us know what you think of the series! Read Part 1 and Part 2.]