Get a Feel For The Real Veronicas in 'Untouched: Stars on the Rise' 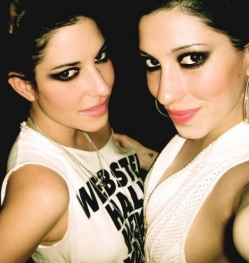 Before you dismiss Jess and Lisa of The Veronicas as just another vapid teen pop group, consider this: remember in Heathers, the seminal 80’s classic, when Veronica (Winona Ryder) meets J.D. (Christian Slater) for the first time? He says “You a Heather?” She replies “No. I’m a Veronica.” That moment is what the Australian pop duo is named after. I will forgive a lot of fashion victim accessorizing (Leopard print cat ears? Sunglasses indoors?) for that back-story.

With a lifetime of making music behind them, twins Lisa and Jess write their own songs and actually sound great live. They enjoyed big time pop stardom down under, and now they are trying to parlay that success to the screaming legions of teeny boppers in the US market. Their new web show, The Veronicas: Untouched: Stars on the Rise aims to follow the young pop stars on their journey. In the series, the Australian singers are up-front and open; they don’t seem to be “handled” by a huge PR team, like their American pop tart counterparts. 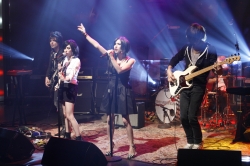 Although at times the series feels a little like VH1 Celebreality with the twins’ frequent bleeped cursing and fighting, it’s still charming to watch The Veronicas try to make a go at stardom, American style. And, no, it’s not just that they’re shrill complaints are delivered with delightful Australian accents; they’re also kind of funny. After a particularly F bomb heavy exchange, Jess remarks, “At least we’re not like the two brothers from Oasis. We don’t start punching each other out on planes.”

At the end of the pilot, we discover that The Veronicas are going to be opening for tween sensations, and fellow family band, The Jonas Brothers. With that kind of exposure, the group is likely to blow up stateside. And with their candid, no holds bard web series, we’re sure to have a real glimpse into how the twins will handle this new chapter in the life of The Veronicas.