Bebo’s The Secret World of Sam King has attracted quite a regular fan base since it’s launch in August of this year. The show has racked up over 400-thousand views, enough for Bebo to announce a second season of the music-heavy show. 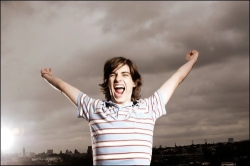 Additionally Bebo has committed to a launch of six new web series come early 2009 under the banner “Bebo Originals.” The success of Sam King and other Bebo wen series like KateModern and Sofia’s Diary have laid the groundwork more teen-focused shows.

A testament to the growing teen market, Sam King’s episodes that have gone most viral featured guest appearances by the Jonas Brothers and the Pussycat Dolls.

This final episode of Sam King leaves little surprises. Audiences were briefly left to question if Sam was going to get to keep his job at Universal Records, but after upcoming smooth crooner Nick Harrison rocks a solid concert organized by Sam, it looks like this web heart throb (who could be a Jonas from a British mother) is safe, for now. Teeny boppers everywhere can rejoice.