Today, after months of delays and strategizing, Strike.TV has finally launched.

It’s been a while since the picket lines of striking WGA writers last winter where the idea of a video portal for professional writers (read: WGA writers) could have a place to showcase their original web series while also owning the rights to all content. The idea seemed simple enough. Writers would head out and rally together resources — celebrity actor friends, camera ops, editors, etc. — calling in all the favors and waivers they could manage.

The content was the easy part. With Hollywood on strike for two months, it seemed everyone had a little time to spare and a hand to lend. In all, some fifty web series were collected for the newly formed site, loading it up with a year’s worth of star-driven series. Here are some of the web series debuting today:

The philosophy and message were solid, that’s for sure. From our interview with Strike.TV founder Peter Hyoguchi earlier this summer:

Hyoguchi is excited about where TV on the web stands today, saying “the internet’s pre-Howdy Doody today,” referring to the 1947-debuted TV show which essentially spawned the advertising-supported television model that exists today. While he notes that there have been some early successes like lonelygirl15 and quarterlife, “we still haven’t haven’t see a true hit show yet,” the kind that reaches a true global scale. “For a show to reach that kind of mass appeal, it’s going to come from a professional team,” he notes. 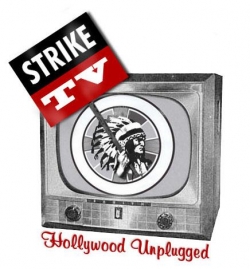 The trickier part was building a video portal from the ground up, especially in a shaky economy. Established players who have been at it for years still haven’t found the magic ticket to web video monetization (read: making money.) Turner’s Superdeluxe site lasted just a year before folding into Adult Swim. Recent layoffs at other web studios/portals — maniaTV, Heavy, Veoh — show these are murky waters that Strike.TV is jumping in to this week.

But from a relatively small team, and just a smattering of investment dollars from some of the more well-heeled writers, the Strike.TV operation is geared from the ground up to be nimble. While it’s not clear how much revenue the recent YouTube and Joost partnership deal will bring in, it will probably be the major source of income for the time being. There’s talk of individual sponsors for each series, though most likely we won’t see these come into play until after the numbers shake out showing which shows can break out and sustain a real audience.

We’ve been following this story for quite a while, so we decided to take a look back at some of the Strike.TV coverage on Tubefilter News: