Let’s get the big news out of the way early. After six episodes that racked up over 500,000 views, the hit mockumentary web series Jesus People is headed to the big screen. The standout of the Independent Comedy Network’s (ICN.tv) inaugural web series crop has shot a full-length feature film that’s due to hit the festival circuit early next year. Tubefilter got an exclusive sneak peek at the film (above) from the creators Dan Ewald and Rajeev Sigamoney with whom we had the chance to sit down and chat with about the film, the web series and the future of web entertainment. 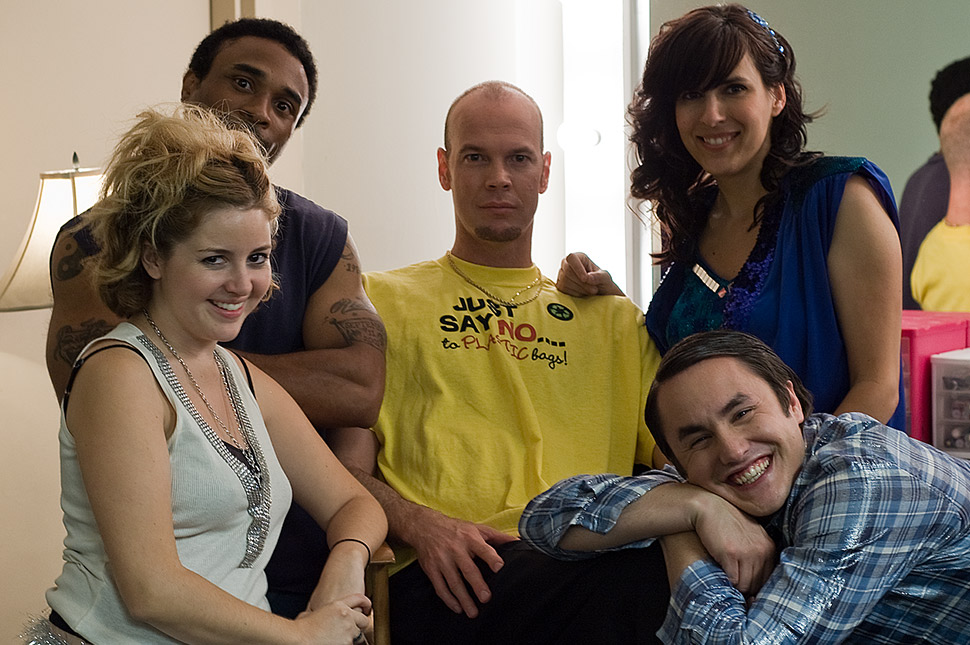 Dan and Rajeev arrive six minutes early for our scheduled mid-afternoon interview at Tubefilter HQ. We had a hunch these guys would be early from talking to a few people that know them. You see Los Angeles is a city with a penchant for lateness, a guiltless acceptance of the dozens of uncontrollable factors that assault the day here. But Dan and Rajeev are the ultimate outsider’s insiders — a bit of a Hollywood enigma. The two man creative team behind the Jesus People would have to be.

We sit down on one of the couches in front of the big screen to take a look at the final two episodes of Jesus People season one. It’s the ultimate interactive DVD commentary, custom tailored to the questions we fire their way. A few laughs in, we realize their actors still crack them up.

Their cast is a comedic clan even Apatow and Guest would have to admire. Most are Groundlings vets well known to casting directors and comedy nerds, and the two know they got a little bit lucky in scoring them all. Joel McCrary (American Beauty) plays the ringleader Jerry, the pastor determined to bring the band Cross My Heart into the throes of the Christian pop scene.

Tim Bagley (Will & Grace) guest starred in the series, after working with with the duo before on several of their growing list of projects through their Ewald/Sigamoney Productions, including a half-hour comedy TV pilot called The Room that didn’t end up getting picked up. “I don’t think there’s another project we’ll ever do that doesn’t involve Tim, he’s that good,” Dan boasts. Having Bagley in place helped secure a number of their guest stars — Kate Flannery (The Office), Deborah Theaker (Waiting for Guffman), Stephnie Weir (Mad TV), and Victoria Jackson (SNL).

For the film version, Bagley and all of the original six regulars are back: McCrary, Edi Patterson, Damon Pfaff, Rich Pierrelouis, Lindsay Stidham (also a writer for Tubefilter News), and Karen Whipple along with the addition of Nikki Boyer, Kevin Kirkpatrick, and Chris Fennessy. 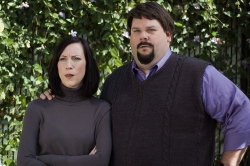 We can’t help but ask how much Christopher Guest (Waiting for Guffman, Best in Show) influenced the project, and Dan and Rajeev aren’t shy in acknowledging his inspiration. Dan’s also a big fan of the comedies of James L. Brooks (The Simpson, As Good As It Gets).

Jesus People – the movie – picks up earlier than the web series, almost an origin story though taking the story on a whole new journey. We see the band come together and begin their rise to Christian Rock stardom complete with all the strife and conflicts you’d expect of a genre band on the brink of a mainstream crossover.

Dan shoots off their pitch, “it’s Spinal Tap set in Christian dance pop,” in a way suggesting this is a well-worn sound bite. Hollywood likes it simple, at least in a pitch meeting. But their work is anything but simple. It’s layered comedy over real dramatic themes. “We’re not making Jesus jokes, we’re making fanatical Christian jokes,” says Rajeev pointing out one of the subtle differences missed by those who give the series just a cursory glance.

Hollywood has treaded lightly when tapping into the sizable religious sentiment in modern American culture. Saved (2004) made waves for its film portrayal of life at an Evangelical Christian high school, managing to show a world that was both hip and hypocritical.

“Any group that thinks they are above satire and criticism just doesn’t work,” Rajeev interjects. “With comedy,” he adds, “the fact that people are laughing at judgmental Christian characters is because they are true.” 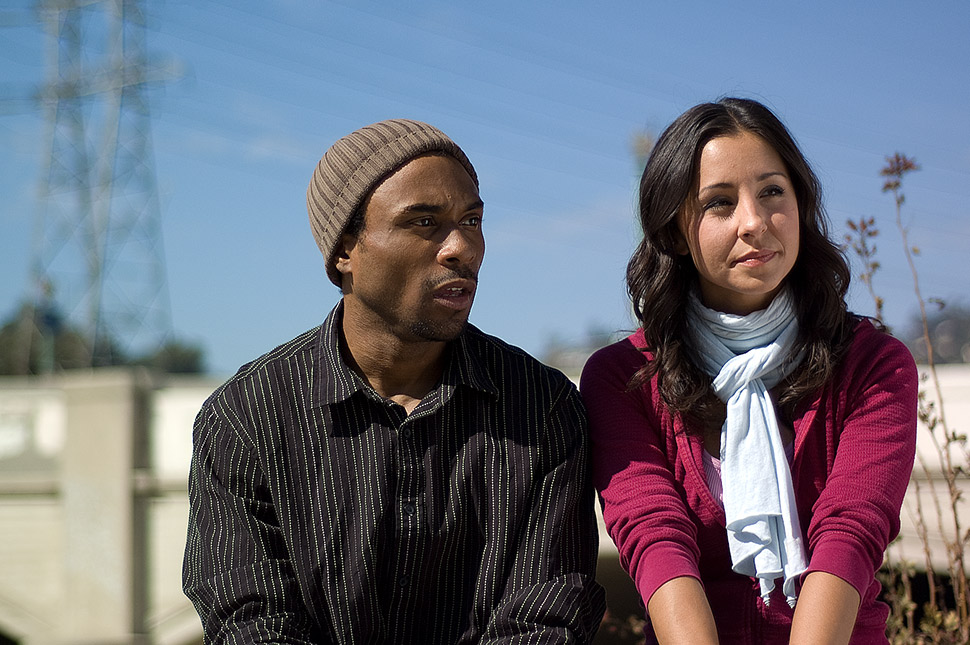 In fact each of the characters come from the pair’s real experiences within the Christian scene. There’s Cara, the part-time Christian who occasionally veers off into darker moral corners. “Sometimes we all are Cara where we don’t know what it means to be Christian,” Rajeev muses. “Ty is the audience’s Jim from The Office — the relatable straight man,” says Dan. Even the more eccentric characters like Tim Bagley’s self-absorbed Rod have an authenticity that makes them accessible.

To satire a culture, you have to truly understand it. “We come from this world,” says Dan, who grew up Baptist in Grand Rapids, Michigan in a tight-knit religious family. Rajeev was raised Seventh-day Adventist in an Indian-American community in a small Maryland suburb.

A pastor in England even asked for a DVD of the series to show during his sermons. Dan and Rajeev asked if he was sure it was appropriate. “Oh don’t worry we’ll love it,” the English pastor assured them. “We’re the land of Ricky Gervais. We want to know what your country will think of it.”

American Christians haven’t exactly charted into the boundary-pushing mainstream comedy waters. But with Jesus People it seems they just may be warming to self satire, as long as the humor is born out of the authentic. In one of his pre-Hollywood jobs, Dan wrote for a few Christian music magazines. “I’ve written over 150 articles on Christian Rock, interviewing all the top bands,” he tells us. “We have a good idea of what they will do and won’t do.”

So far, despite a few detractors, the web series has struck a chord in the Christian community. “We played the series at a number of Christian film festivals and they loved it,” Dan points out. They seemed to have tactfully tapped the vibrancy and energy that fuels the Christian pop scene, while keeping the humor notched up to carry a feature length comedy.

From Web to Film 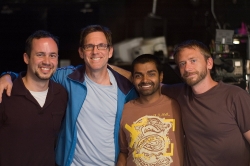 “Everything is bigger this time,” they tell us of what to expect in the film version. The band even has a pop hit, “Jesus Save The World” that catapults the pop group onto the public stage. The cast has grown, with a laundry list of veteran improv masters joining the fun this time around — Mindy Sterling (Austin Powers), Jennifer Elise Cox (The Brady Bunch Movie), Laura Silverman (The Sarah Silverman Program), Wendi McClendon-Covey (Reno 911), Octavia Spencer (Bad Santa), Carrie Aizley (For Your Consideration), Shon Little (Everybody Hates Chris), Catherine Reitman (Thank You For Smoking), Timothy Brennen (Hancock), Christen Sussin (Curb Your Enthusiasm), and Robert Bagnell (The Comeback).

With satirical comedy, especially from sketch comedy players, there’s a tendency to go big. “We actually had to have a few of the guest actors watch the web series to get a sense for the tone of the project,” Dan tells us. “Afterwards, they would pull it way back and it would be perfect.”

While Dan and Rajeev finish cutting the film and lining up distribution — you would think would be enough work to keep them busy — the two-man team has even more in the hopper. A new web project is on the horizon, they tell us, which means these versatile filmmakers won’t be leaving the web series world just yet.