From Thom Woodley and Bob McClure comes All’s Faire, a comedy slice of life web series with an ensemble cast of minstrels, wenches, warlocks, and royals. Think The Office at a Renaissance Faire. Previously, Woodley created The Burg and The All-For-Nots with Dinosaur Diorama partner Kathleen Grace. (See our recent interview with Woodley and Grace.) McClure may look familiar on the web screen too — he played Jed in The Burg.

In the same manner as the MMOG-obsessed gamers chronicled by The Guild, All’s Faire explores a rich subculture full of a few very committed (and costumed) people. Woodley tells us the idea came from McClure. “It was something we both felt was funny as we knew people who quit college to join the Faire. Sort of like running off and joining the circus.”

Now, if you heard tell of the Ren Faire film starring Christina Ricci that is now in production, and noticed it’s very similar name, it may be more than a coincidence. McClure and Woodley originally conceived the idea as a screenplay in 2004 and took it to some producers. “They suggested it be more mainstream, either a sex comedy or about guys hiding out from the mob in the Ren Faire. We declined, and did nothing with it.” Three years later, a film is announced with the title Ye Olde Times about “a guy hiding out in the Ren Faire.”

“Our eyebrows raise,” says Woodley. “We decide rather than compete in the feature script area, we’ll do what we do best and take it online. 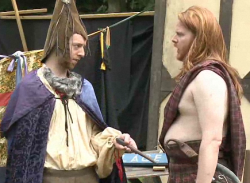 In July 2008, we release our trailer. On September 10 [of this year] we release our shorts online.” Two days later, Ye Olde Times announces it is now a sex comedy and has changed its name to All’s Faire in Love, and “our eyebrows shoot off our faces,” says Woodley. Go to! Fie upon that.

Like its Dinosaur Diorama predecessors The Burg and The All-For-Nots, All’s Faire is artfully shot, well edited, and directed with a good-natured tone that never sneers at its merrily anachronistic characters. So, real Rennies, fear not. The folks of All’s Faire come in peace. As you might expect, the funniest moments come from the modern day slipping into the medieval world. Ben the stage manager (Joe Thompson) walks around with a clip board, Ploppy the Mud Mistress (Maryll Botula) asks whether there are any other mud mistress gigs opening up. The gifted cast has impeccable timing; they go from medieval speak to singing Bob Marley without ever winking at the audience.

And what about that “coincidence” involving the upcoming film? “It’s doubtful anything was stolen from us,” Woodley adds. “It’s a fairly obvious title. The bigger thing is how we hope to have our show out in full force before the movie hits, and hopefully make the case that internet video, even with no money, can move faster and funnier than Hollywood can.”

You can check out all the merry players in their shire at www.allsfaire.tv.