The hospital spoof series looks to be holding nothing back creatively and promises “beautiful doctors with tragic flaws [that] struggle with charged emotional and sexual politics in the workplace.” That workplace of course is a working childrens’ hospital complete with the impressionable pre-adolescents to bear witness to these candid doctors’ affairs. 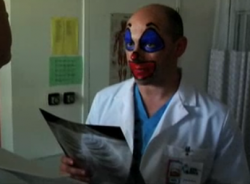 There’s an obvious satirical nod at Patch Adams, only this time Corddry faces fierce competition as the clown doctor looking to heal the children through laughter. The only way to settle it? “A healing-power-of-laughter-off” of course.

Despite its bovious star-power and studio backing, Corddry and crew were given a pretty long leash creatively, allowing for much racier jokes than would make muster on even the cable networks. “On the Internet, you can have an idea, write it up, cast your friends and have people watch it all within a ridiculously short period of time.  And you can swear,” said Corddry, who also directed the series.