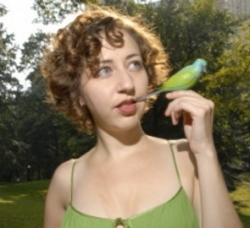 Kristen Schaal is everywhere lately. If you’ve ever tuned in to HBO’s Flight of the Conchords, then you are no doubt familiar with her hilarious portrayal of Conchords’ libidinous superfan Mel. Maybe you’ve spotted her as the newest correspondent on The Daily Show, or caught her working the Sterling Cooper phones on AMC’s hit Mad Men. She and her comedy partner, Kurt Braunohler have been performing together for years, from the Hot Tub Variety Hour to their various appearances as comedy festivals across the continent. They’re known as darlings of the New York comedy scene, consistently bringing their brand of unique, silly humor to everything they do.

Even though Superdeluxe was given the axe from Turner, new episodes of Penelope Princess of Pets, the sometimes surreal, sometimes absurdist, always hilarious and creative web series by Schaal and Braunohler have been uploaded as recently as this month. The show explores the adventures of Penelope (Schaal), a girl who realized she could talk to animals when she “became a woman,” and her adventures as she tries to save the world by assassinating a senator. Her sidekicks Kyle the Orphan (Braunohler) and her alcoholic pet bird, Ruby (Brett Gelman), help her along the way as she escapes bloodthirsty neighborhood watch gangs, turns into cardboard, and follows a turtle riding a dirt bike. And if you think that sounds weird, you should watch the show.

Kristen and Kurt directed the “Mutiny, I Promise You” video for The New Pornographers, which does double duty as Episode 4 of their show (see below). Elsewhere on the web, be sure to check out Kristen in Horrible People on MyDamnChannel.