The Press Loves this Palin: Sara Dishes on All Things Sarah 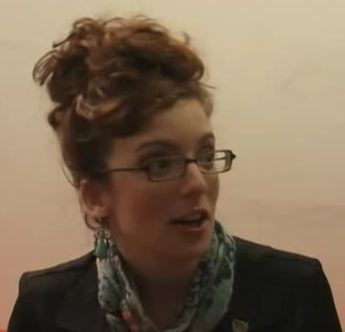 New York based comedian Sara Benincasa is a radio host, writer, citizen journalist for the MTV News Choose or Lose Street Team, host of “Family Hour with Auntie Sara” every Saturday night at Ochi’s Lounge/Comix in NYC, and she happens to do the best Sarah Palin impersonation this side of Tina Fey. Her popular Sarah Palin vlogs have earned her national attention. She’s even getting prime billing in The Huffington Post’s comedy channel 23/6.com.

Over the past few weeks, she’s been interviewed by all kinds of traditional media, including Newsweek who called Benincasa’s Palin “all wide eyes and flat accent … clueless yet ruthless, guileless yet cruel—and freaking hilarious.” Here’s what Sara herself has to say about her vlog, instant internet fame, and her future on the web.

TF: What started as you just messing around with your friend has become a huge phenomenon, with mentions of your vlog in Newsweek, The Huffington Post, Wired, and CNN to name a few. Were you surprised by the reaction you got?

Sara Benincasa: Oh my goodness, we were absolutely shocked by the response. We were just having a good time, blowing off steam about this wacky candidate who’d just been announced the previous day … The more I learned about Palin, the more menacing and hilarious she became. Diana and I like to dress up in weird costumes, so she did my hair and makeup and we turned the camera on and just improvised for an hour and a half. And the first several vlogs came out of that improv session. I cut one and put it up Labor Day morning, and by the end of the day we were getting comments and emails from around the world. The next day, Wonkette picked it up, and then Mediabistro, and then Newsweek, and then a bunch of other blogs, plus ABCNews.com, CNN.com, and actual TV-style CNN.

TF: What differentiates your impression from a lot of other Palin impersonations is that you imagine her in a more three dimensional way, where she’s very human, even kind of likable. Do you have any affection for the real Sarah Palin?

SB: It’s funny. I don’t have affection for Sarah Palin as a person, but I’m fascinated by her as an archetype, as a character. To me, she’s the cruel popular girl from high school mixed with this sort of grotesque character in our present version of political theatre. She’s not the empty-headed bimbo; she’s the mean, pretty one with enough smarts and lack of ethics to wrangle the Student Council presidency out of the hands of a much more qualified, much kinder candidate … And of course, she has the classic codependent relationship with a lesser female, her cousin/campaign manager/personal assistant/nail technician, Dina Heath-Barr, who is played by my comedy partner Diana Saez. Or at least, that’s how Diana Saez and I envision her. We watched a few minutes of Palin speaking and then just rolled with it, inventing the character as we went along. She’s a liberal’s nightmare in shitty lipstick.

TF: Obviously, the Palin vlog appeals to liberal and Democrats, but do you have many Republican and Conservative fans? 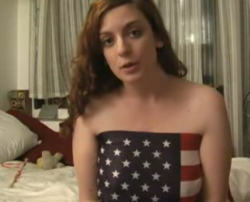 SB: We do have some Republican fans and some conservative fans. Not all Republicans are stoked about this choice for VP. In fact, my dad, who hasn’t voted for a Democrat since Mondale (ahh, heartbreak), is really worried about what could happen if McCain kicks off and Palin becomes the president. He is not cool with those rumors about her intimidating the town librarian. And the shooting-from-helicopters thing freaks him out. So we get some love from disenchanted Republicans, and we also get some love from people who just enjoy all things Palin. Some people write to us and say, “I am a Palin supporter, but I think you girls are very funny!” And that’s particularly rewarding as a comedian, when you’ve managed to get folks who don’t share your viewpoint to embrace your jokes.

TF: Do you have any plans to make more serial web content down the pike?

SB: Yes indeedy doo! Diana and I are negotiating with a website right now in order to bring our Palin videos to the masses with, like, an actual budget, so that we can buy lights instead of just taking the lampshade off a lamp and pointing a bare bulb at our faces, which is totally what we do now. We hope to convince other people to pay us to make things that are funny. To us, making little videos that amuse people at their desks …that’s awesome. Especially when we get to sneak our political points in there, too (Or bash them in there with a sledgehammer).