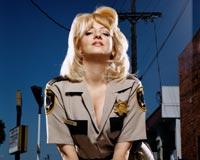 Tubefilter recently dished on the upcoming re-make of Stephen King’s 1980’s cult classic, Creepshow. The online re-make, Creepshow: Raw is on it’s way to freak you out of your skin. While we anxiously await the joyously scary revival from HD Films, we caught up with star Wendi Mclendon-Covey, of Reno 911! fame to get the scoop.

Tubefilter: How did you get involved with the Creepshow project?

Wendi Mclendon-Covey: I worked with HD FILMS on an episode of the Jace Hall Show (on Crackle and X-Box Live), and they were nice enough to ask me to be a part of their pilot episode. Jace Hall is the creator of LOTS of popular video games, and he’s got a lot of new high concept web series in production. Jace Hall and the team at HD FILMS will revolutionize the concept of “web series.”

TF: Were you a fan of the Stephen King originals?

onest, I wasn’t a fan of the horror genre in general– I’m very squeamish! But holding handfuls of fake bloody intestines for this project helped me conquer my fears. (Hmmm…I really hope those were fake, now that I think about it.)

TF: What can you tell us about your role?

W M-C: I play the role of a not-very-good mother to a very brave little boy. I’m not sure I can say much more than that, since I haven’t seen how the whole thing has been edited together, but I can tell you that Sam Hafermalz, the kid who plays my son, is a pistol!

TF: Are we gonna be freaked out of our skin when we see it?

W M-C: Oh, you’ll be freaked out alright! Your monitors will melt.

TF: Do you get to scream a lot?

TF: What was it like working with Wilmer (Creepshow: Raw is Wilmer Valderama’s directorial debut), and Michael Madsen? Was this Wilmer’s first directing project?

W M-C: Wilmer Valderama is a born director. He was very collaborative and easygoing – totally in control of his set. And Michael Madsen was a gem! I was so nervous to work with him at first; I’m sure I said plenty of stupid things. He must think I’m a dork (and he’d be right!)

TF: What’s the plan for the sale of the show?

W M-C: As far as I know, it is mainly planned for a web platform. They’re putting lots of money into it, and there’s a lot of support behind it. The footage that I saw was stunning! The special effects, the lighting…it looked like a big budget film!

TF: You created your own web show recently…. how is that going?

W M-C: Yes, I did a web series with 60 Frames called GILF, which is like a MILF, but the G stands for “grandma.” I’m actually surprised at how many people I’ve had to explain that to. I thought it was common knowledge. Anyway, I play a 37-year-old “mammaw” whose 21 year old daughter has a toddler and a baby on the way. Highly dysfunctional! Anyway, it was fun to do, but I opted to only do 4 episodes because it was a lot of work for very little money. Plus, the concept was really skewed towards a female audience, and I didn’t think it fit in with the rest of the 60 Frames shows. But I’m proud of it.

TF: Any other web projects for you in the future? Anything else you’re working on?

W M-C: I’m not really interested in creating anymore web content at the moment, but I’d be a hired gun in someone else’s project if it’s as good as Creepshow is going to be. Believe me – I’ll work with HD Films on whatever they want me to do, whenever they want me to do it! As far as other projects go, I’ve done a few indie films lately, I’m performing in the funniest spoof of all acting classes called the Beverly Winwood Actor’s Showcase at the Groundlings Theater, I’m writing and doing charity stuff, blahblahblah. And as far as the status of Reno 911, who knows? Of course you can find out what I’m doing by checking out my Myspace page. I should probably get a Facebook page, huh? It takes me a while to get up to speed on these things.