It’s less than a year from now, America is under martial law, the Patriot Act has been expanded during the nation’s continued state of emergency, George W. Bush is still President and there’s rebel activity in the Hollywood Hills. Oh, and three major American cities have been destroyed by an unknown force.

2009 A True Story is a sci-fi drama of a daunting glimpse into the not so distant future that asks the question: What would life be like for ordinary citizens of the United States if the war came home? 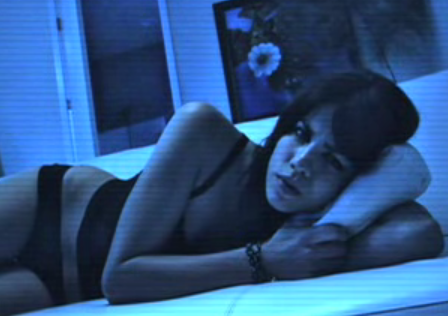 It’s Cloverfield meets lonelygirl15 meets Generation Kill in 13 succinct episodes that present the story of Sara Ford (played by Kate Maloney) and her brother, US Army Specialist Adam Ford (Cody Harnish) who are separated by war and utter chaos. We journey with them as they try to keep from going crazy while searching for one another.

Each episode is told via a spilt POV between brother and sister via Sara’s camcorder and Adam’s helmet camera.

2009 is Tony E. Valenzuela’s (Creator/Writer/Director/Editor/Producer) debut web series. “I never expected 2009 to go where it’s gone and receive the attention it’s gotten,” Valenzuela said. “If you watch along you’ll get a huge reward. We believe our audience is smart, talented and interesting and we want to cater to those people.”

Now Valenzuela is having lunch and coffee all over town with the pioneers of web TV. Valenzuela and his production company, Strange Radio Productions hooked up with a diligent production team that includes D.P., writing partner and Co-Producer Jeffrey Hunt (2nd AD from Numb3rs), and Producer Jason Bernstein.

Valenzuela also enlisted the highly supportive services of Matt Sigloch and Jon Barton from The Gun Metal Group whose job it is to ensure all of the details of the scenes that involve the military are as realistic and accurate as possible. The group has also worked on Heroes, Cloverfield, and a slew of CBS projects.

2009 was shot for around $20,000 using a DVX (Highres, 4:3 ratio) and was “junked up” and pixilated to avoid a super clean look. “We wanted to stay away from anything that resembled Network Television,” said Valenzuela. “Anything that felt like regular TV was either altered or tossed out.”

No detail of this project has been overlooked. In fact, the www.2009atruestory.com landing page changes four times a day, depending upon where in the world you are. As ‘HNS’ the “Homeland News Services” reminds us to “Keep the dream alive, America,” we wonder quite logically, how we got here, what’s going on and what’s going to happen next.

The series originally aired on April 11, 2008 and the production team had been hoping for 10,000 views in total with 500-1,000 per episode. To date, episode one has 1.7 million viewers and counting on YouTube with the subsequent ones averaging 70,000 a piece. Valenzuela hopes his audiences will make up their own minds as to what the story is really about. “Every audience member/viewer holds a piece to the puzzle. Every opinion is valid,” he concluded.

Want more? Season 2 of 2009 kicks off on January 1, 2009. Word has it that Valenzuela and Strange Radio Productions also have some other sci-fi web projects in the works.