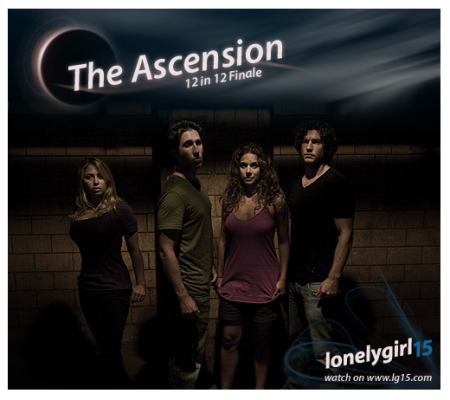 Two years, three seasons, and 554 episodes after lonelygirl15 first captured the imagination of millions of viewers, the show is finally coming to an end. Starting tomorrow (August 1, 2008) at 8am PST, one new episode of LG15 will be released every hour at the top of the hour for 12 hours. It’s a “12-in-12” release that die hard fans will recall from the Season One finale. EQAL, the production company behind LG15 and KateModern, also used the 12-in-12 approach to wrap up KateModern earlier this summer. This means that you have about 12 hours tonight to catch up on any of the episodes you might have missed in the last couple of months – best to get started now.

If twelve whole hours of lonelygirl15 won’t satiate you for long, don’t worry, the LG universe will be back in a big way this fall, with the release of the still-under-wraps sequel in September. Series creators Miles Beckett and Greg Goodfried are mum about all but a few details – but we do know that an alternate reality game (ARG) setting up the premiere is already well under way. “The new show is not going to be a fusion of lonelygirl15 and KateModern,” the creators said in a recent blog post. “Instead, it will take the best things from each show, meaning that we will apply what we’ve learned from producing them over the past two years – writing, interactivity, 12 in 12’s, etc. There might be some familiar characters in the new show, but we do not intend on combining the two series.”

Rumor has it that things might get started a wee bit earlier than 8am tomorrow, so it might not hurt to rise with the sun – and with tomorrow’s total eclipse, who knows what might be in store.

Update: It looks like lonelygirl15 fans might not have to mourn the end of the show for long – Nikki Katz has taken up the banner with a twitter novel inspired by the show.