Interview with 'lonelygirl15' writer Mary Feuer on her new show 'With The Angels' on Strike.TV

Tubefilter News caught up with Mary Feuer, one of the writers of the seminal web series lonelygirl15, to talk about her new web show, With The Angels, premiering next month on StrikeTV. The show brings together a slew of LG15 vets, starring Carly Jones (“Mallory” from LG15) and Sean Vincent Biggins (“Dr. Calvin Hart” from LG15) and featuring fellow lonelygirl15 scribe Jonathan Robert Kaplan as a co-writer. Set to launch soon (early August) on StrikeTV, the show plans to roll out a whopping 36 episodes in its initial run. 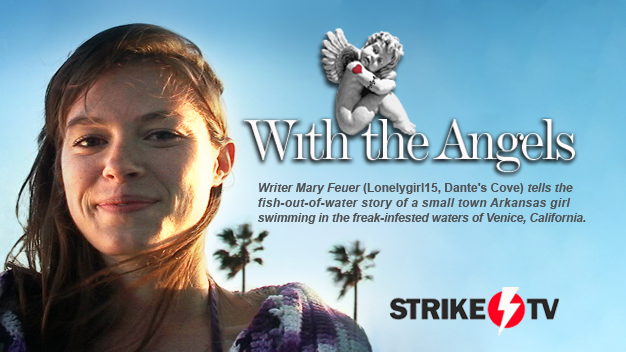 Tubefilter: Why 36 episodes? How long is each (give or take)?

Mary Feuer: I started out planning to do 24, and we’d be done now if I’d stuck to that. But I couldn’t tell the story I wanted to tell in 24 episodes. We’ve got 6 major characters, and they all have stories I want to tie together and resolve, so all of a sudden there were 36. There could actually end up being more. I’m hoping people will jump into the forums on Strike TV and talk about what they’re seeing once the episodes go up, so that could spark some new ideas.

So far, the longest is 7 minutes and the shortest is 30 seconds. The average is 4 and a half minutes.

TF: Where are you in production?

Feuer: Do you mean physically where, or how close to done are we? If it’s the first, we shoot in Venice, California. If it’s the second, we just finished shooting our 24th episode.

TF: You were a writer on lonelygirl15. Will With The Angels remind us of LG15? 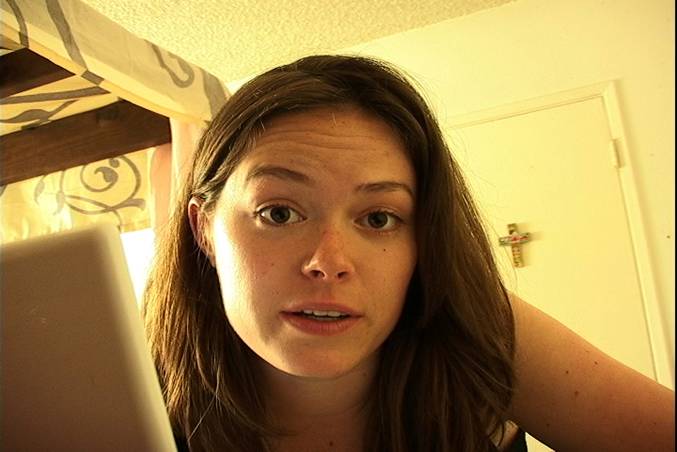 Feuer: The blog style will remind you of LG15. The fact that Taffy, the main character, is kind of an isolated person who reaches out to people on the web for companionship is another similarity. But I guess for me the biggest difference is that on LG15 people are necessarily always reacting to a big external threat, and the conflicts in “With the Angels” are more interpersonal. They come from things as basic as having an incompatible roommate, failing at a career, falling for the wrong person, having your belief system rocked when it collides with someone else’s, things like that.

None of this is to say anything against Lonelygirl15 – they do what they do incredibly well, and I still watch and enjoy the show. It’s just different.

Feuer: You’ll have to ask Strike TV about that one: there are a few logistical things that are still being sorted out, I guess. But soon. Very soon. When I find out, I’ll let you know.

[Ed. Note: StrikeTV is aiming for an early August release.]

TF: Is it easier/how is it different than writing/shooting for television?

Feuer: It’s definitely not easier – but it is different, in my opinion. That’s why it doesn’t necessarily work when someone chops up their feature and posts it as a web series.

The first-person storytelling is the biggest difference. It’s not the only way to go, but it certainly is one great option. I’m really interested in exploring that – it’s something the web does incredibly well that doesn’t so much work in other mediums. Well, it works, but to a very different effect: when you have someone talk straight to the camera in a movie or on TV, it feels theatrical because it reminds you there’s a camera there and you lose that “fly on the wall” sensation. But on the web, with a blog, you’re acknowledging the camera and looking through it to the person sitting on the other side, who is much more actively engaged than someone watching a movie or show. It’s an overused word, but the web really is very intimate. As TV and the internet merge, this will be less true, so I feel like, let’s explore this while we can.

At this point in time, too, most people are still viewing on tiny screens, so, visually, it’s going to have to be different than what you’d put on a larger canvas. And shorter, which I find really fun, because you can enter and exit stories in all kinds of ways. There aren’t so many formulas and structural rules, so there’s room to play. You don’t have to color within the lines – you can drop pieces of your story all over the internet like breadcrumbs for people to find if you want to. It’s great.

Feuer: This is an exciting time. I think it was Cocteau (right?) who said that “Film will only be an art when its materials are as inexpensive as pencil and paper.” I think we’re there.