'Dr. Horrible' Sequel In The Works? 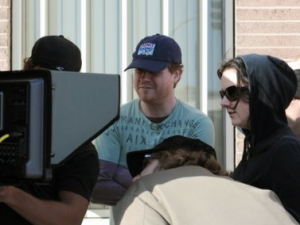 Dr. Horrible may have closed free viewing of its three acts today, but that hasn’t stopped the buzz around the series from spreading. The internet musical, starring Neil Patrick Harris, Nathan Fillion, and Felicia Day, could be modestly described as a smash hit – Whedon fans took down the Dr. Horrible site on the first day of release, and fan site Whedonesque.com voluntarily went down for a couple of days to avoid exceeding their bandwidth. As Felicia Day twittered yesterday, “Whedon fans have a knack for crashing servers!” Even on iTunes, Dr. Horrible has topped the charts for TV shows, taking first, second, and third for the three acts (which can be bought for $1.99 each, or $3.99 for all three).

Considering all this buzz, it comes as no surprise that the rumors are already starting that we could see another Dr. Horrible appearance. During a live chat with fans earlier today, when asked about a possible sequel, Whedon typed back, “It’s over! Let it go! Or, okay…. We’d love to, but it wouldn’t be simple and it wouldn’t be soon. And frankly, Neil needs to work on his singing. The voice has promise, but…” Well, our industry sources say that the chances of a sequel are higher than that and could begin shooting as early as September.

Of course, we will have to wait and see; the DVD for Dr. Horrible has yet to be released, but considering the kind of traffic the debut attracted, as well as the popularity of the iTunes release, Dr. Horrible should prove to be a profitable venture in the end, and will probably establish itself as the “sitebuster” hit of the summer. Combined with the twisted ending, we’d say that it is highly likely that this isn’t the last time we’ve heard from the Doctor and his friends in the Evil League of Evil.

UPDATE: While no public confirmation to report just yet on the sequel, Neil Patrick Harris had this to say when asked by Alan Sepinwall about what to expect: “Joss has some strange giant master plan that includes much more than a sequel. Joss thinks on a great many levels. I think we’re all giggling like little schoolgirls for a week or so and then he’ll figure out what he wants to do next.”