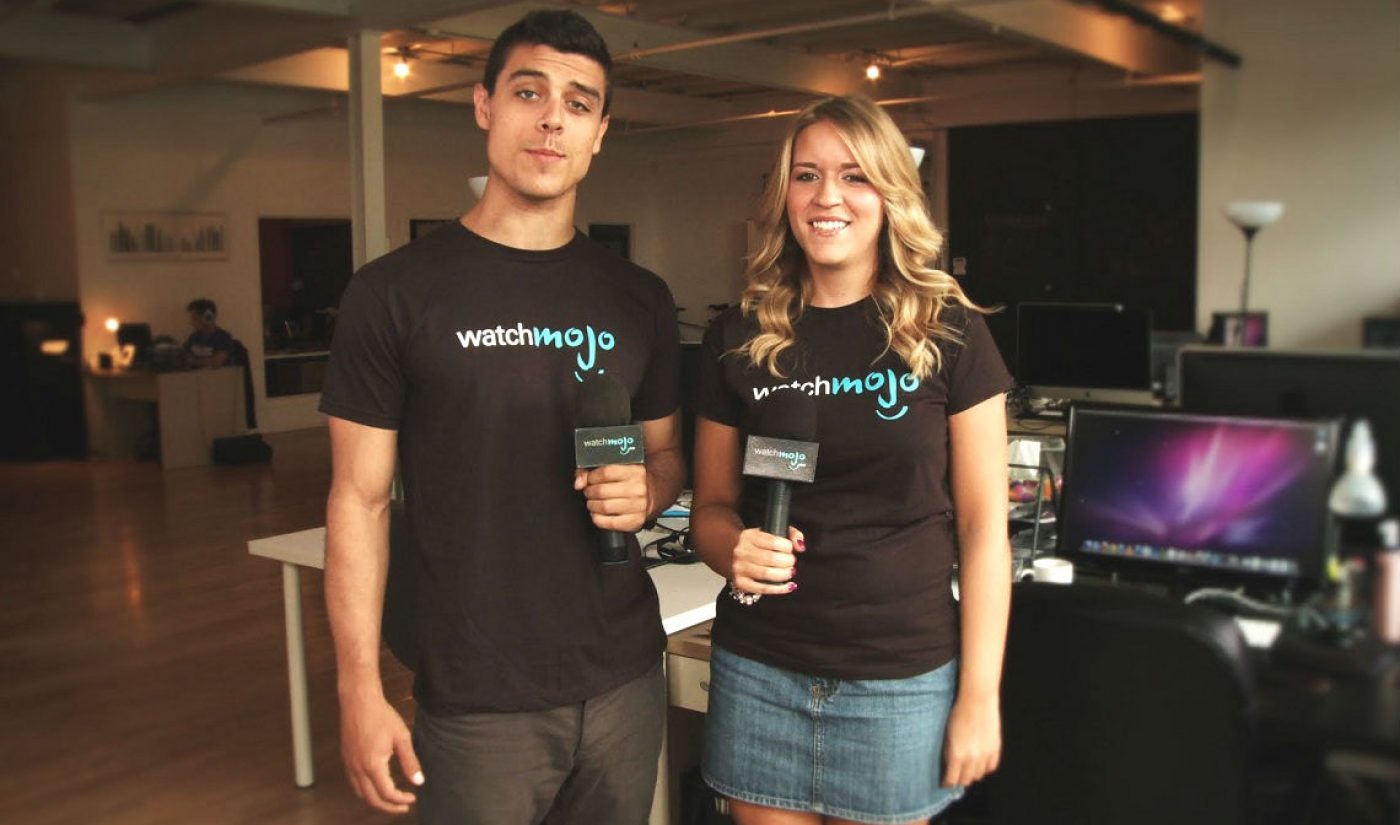 Founded over ten years ago in 2005, WatchMojo has grown into an online video powerhouse. The pop culture and entertainment-centric production company, known for its top ten lists and countdowns, ran the 7th-largest YouTube channel in 2014. Since its inception, WatchMojo’s channel has pulled in more than 4.9 billion video views to date from over 10 million subscribers (who watch an average of 180 million videos per month).

We sat down with WatchMojo’s CEO Ashkan Karbasfrooshan to discuss how the brand moved from less than 100,000 subs just a few years ago to more than ten million today.

Tubefilter: How does it feel to have 10 million subscribers? What do you want to say to your fans?

Ashkan Karbasfrooshan: We literally could not have done this without our Mojoholics 🙂 – but in all seriousness, we thank them for helping us perpetually up our game. We listened to the viewers – both fans and critics – early on when we had less than 100,000 subs… did so even more religiously from 100,000 to 1,000,000 thus launching our WatchMojo.com/suggest tool… and then did our best to stay on top of feedback via YouTube comments, the suggest tool, emails, tweets and what not. I think that as we have gone from 100K to 10M in 3 years, it’s been a challenge to please the early fans as our audience has grown more mainstream, but hopefully they all agree that we have managed to up production from 1 clip per day to 6 today (!) while upping quality, which is never easy.

TF: Tell us about your strategy for growing your channel from 100,000 subscribers in 2013 to over 10 million two years later.

AK: We give the viewers what they want, even if it meant adopting a contrarian outlook. I mean, YouTube personalities (vloggers) are without a doubt the “soul” of YouTube, but most are too in-your-face, subjective, and niche to adopt a wide audience. That’s not a knock, but a lot more people are into objective content that focuses on the subject matter they’re interested in and passionate about without the video being about one person’s opinion. There’s a place for both styles, but we make no apologies about letting the topic be front and center.

Other than that, once the viewers embraced the suggest tool, then of course having a scalable production model that could increase the scope and breadth of topics was essential. So in some ways, and it’s what I call the “american idol” effect where viewers have a say in who (or what topics) prevail and by the time a video is published, they have a vested interest in the subject.

TF: WatchMojo originally started out producing how-to videos and guides. What caused the change in focus to be more on pop culture, and how difficult of a change was that for WatchMojo as a brand?

AK: It was less about how to’s and guides and more about our initial vision to “inform and entertain through video” with the mission of producing a video on every topic. But then it was clear that how to’s would be a downward spiral, as you’d end up competing with UGC… and frankly at the high end of the spectrum, you’d be competing with big platforms like AOL hiring celebs like Heidi Klum to do more polished how to’s that weren’t necessarily more helpful but sexier. So we focused on what we were passionate about (factual countdowns) and something we were willing to do for free, so to speak.

That said, it wasn’t a hard challenge. Early on we produced very good quality content that other media platforms would license, but I’ll be the first to admit that there wasn’t necessarily a community to individual viewers that “lived and breathed” the brand. So once it was clear that we would not treat YouTube like just any other platform, but that YouTube was THE platform, then we focused on what we felt was our “comparative advantage” and just did it better, faster than anyone else.

Lastly, it’s worth stressing that the first video we produced was a top 10 list, we did top 10 lists initially too… but how to’s were easier and a sound base early on. We then moved to biographies but once we covered A-listers and were covering C-listers (haha) it made sense to focus on and tackle top 10s because – despite what some of the critics will say – you can never run out of top 10 lists to do.

TF: What do you think is the appeal of list-style videos like the ones you do?

AK: I think it’s a reflection of a short attention span and human being’s natural interest in competition. Moreover, whereas only (for example) a Beyonce fan will click on a Beyonce biography explaining how she became a star, a much wider group will click on a top-10 Beyonce video, as it serves as a curated overview of why Beyonce is popular.

When people ask me: “is the top 10 format what explains your success?” I tell them that it’s more about finding a format that works for them. Are you interested and passionate about the format? Is it something you can do better than others? Can you do a million of videos in that format? After all, a top 10 list is a good way to get people watching, talking, and sharing your video, but if you don’t do a good job of it, it will kill your brand.

TF: How does your team manage to produce 4-6 top 10 videos every day? What’s that process look like?

AK: Great question! I take much pride in admitting that I have never shot or edited a single frame. But I love and “get” content. So from the get-go, I realized that you need a certain production matrix or formula with regards to researchers, writers, hosts, videographers, video editors etc., so from the onset, we scaled up and today we have a team of 30 full-time salaried employees and another 100 part-time freelancers to reinforce and accelerate our production output.

We publish 60-75 minutes of content each day, which is 2000 minutes per month. So each video has a given producer but a given list is the result of a 100+ man hours and dozens of full-time and part-time team members, not to mention the thousands of votes from the 100,000+ WM suggest users and 10,000,000+ community members. We tackle each project and research it and look at criteria, we scour countless of sources, and then frankly debate each topic to deliver the best objective list possible.

TF: Your most popular video is about the top 10 Bruce Lee moments. But what’s your personal favorite video WatchMojo has produced?

AK: When it comes to categories, I personally like pop culture, history, and music lists… even though movies and video games are more popular. I like everything that covers iconic topics and themes… there’s something to be said about nostalgia. People like things they’re into at a given point which speaks to their passion points, or things they can relate to watching/reading/listening while growing up. So, we nail that pretty well.

TF: Why do you want to launch a channel aimed at women?

AK: When we did the how to’s and early lists, our audience was more or less 50-50, but as we were a team consisting of 75-25% men at the office, it was a self-fulfilling prophecy that we’d end up covering and catering to a male demo. I like to say that what is a bad idea at 1M subs may be a great idea at 10M subs, so today, we have 20% of our subs and 40% of viewers that are female and by and large, most lists are universal. There are some skews/slants in those universal lists that skew to a male demo… then there are some lists that we simply can’t produce as they’d alienate our core male millennial demo.

But given the popularity of the suggest tool, we get a lot of popular suggestions that clearly would cater to a female demo so today, we feel that there’s a demand that we could and should fill. Ultimately, we were successful because we listen to our demo and give them entertaining and informative content, but our biggest risk on the core WatchMojo channel is trying to be everything to everyone, so at our size, it made sense to launch a women’s channel… which we plan to do in February via MsMojo.

TF: You recently launched a Spanish channel, and are planning to launch more in other languages as well. What’s the reasoning behind this?

AK: We are about to launch Portuguese, Dutch, German, Polish, Turkish, French channels with plans for Korean, Japanese, Mandarin and many more. Personality-driven channels don’t necessarily lend themselves well to global editions, but as American-centric pop culture and franchises are universally beloved, it makes sense.

We have 40% of our viewers in the US, if you add Canada, UK and Australia we have 50% of our YouTube audience being English-speaking, which means that 50% are global audiences that at least understand English, but if those viewers have friends or family that don’t speak English but like the topics we cover then it makes sense to launch versions for them.

TF: What’s next for your channel and the WatchMojo brand?

AK: Coca-Cola and MTV became billion dollar brands because they embraced globalization. My objective is to build the next billion dollar brand. Being based in Montreal, I have always said that we’re the next great entertainment export out of Montreal after Just For Laughs and Le Cirque Du Soleil. Inasmuch as I respect what builders like Steve Jobs or Larry Page did, I’ve always wondered what William Randolph Hearst, Walt Disney, or Rupert Murdoch did early on… so my goal is definitely leverage the amazing YouTube platform to build the greatest media company of the 21st century… and we’re well on our way to achieve that vision.