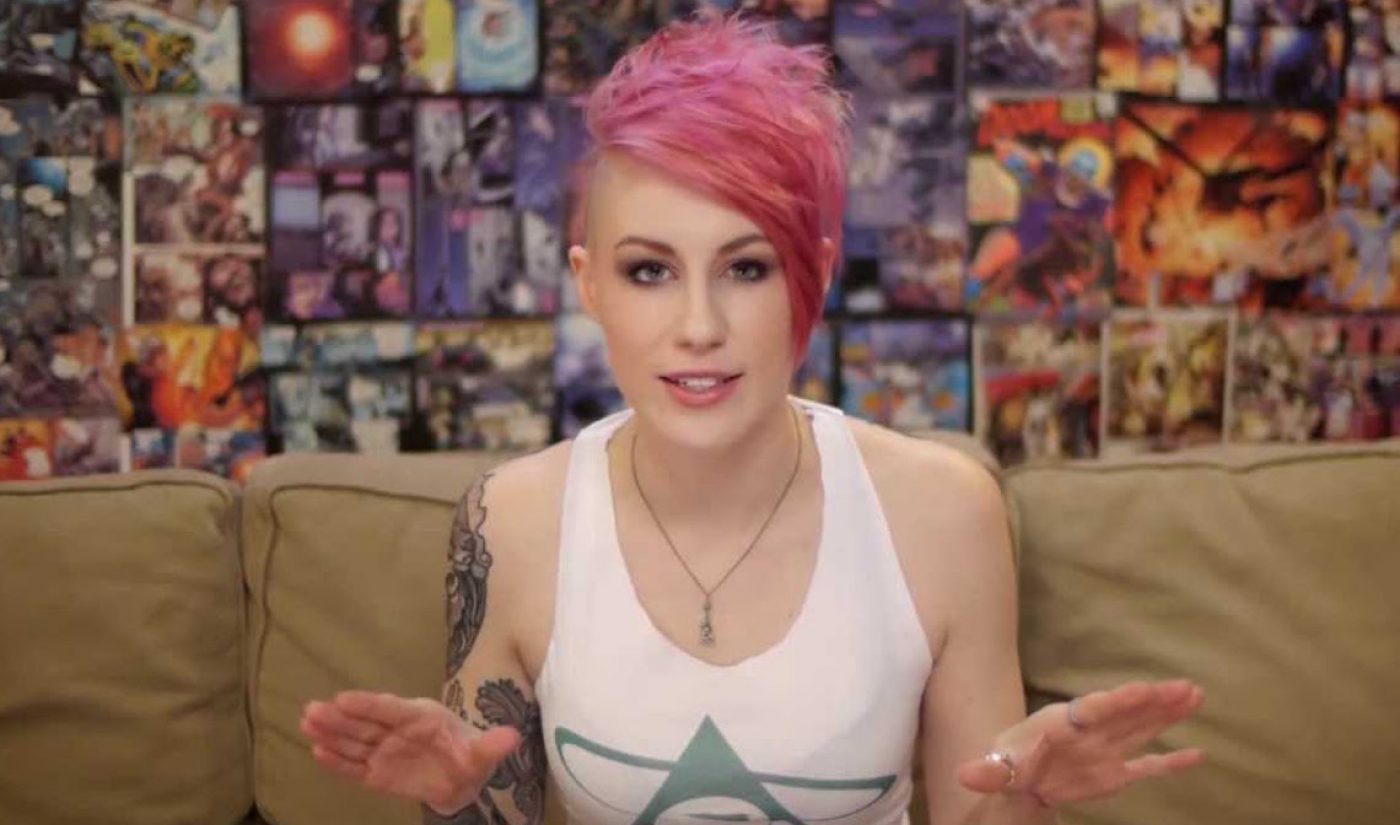 Fantasy franchises like X-Men and Game of Thrones are filled with lore, and a passionate nerd with brightly-colored hair is using her knowledge of said lore, as well as her acceptance of cutting-edge distribution methods, to capture viewers who want to dive deep into fantasy and sci-fi worlds.

Comicbookgirl19, whose articulate and insightful pop culture commentary initially allowed her to rack up over 370,000 subscribers and tens of millions of views on YouTube, has found crucial monetary success since she began selling some of her long, more in-depth and detailed videos directly to fans through Vimeo On Demand. CBG19, as she is known to many online, exemplifies the benefits of the alternate distribution platforms available to creators today, that let them connect directly to their biggest fans and offer more entertainment and educational value for a greater return on their video-making investments. I could explain exactly what I mean, but I’d rather let her do that for me. We asked

[Another Editor’s note: This interview has been lightly edited for length and clarity.]

Tubefilter: What made you decide to distribute some of your Epic Histories via Vimeo On Demand?

Comicbookgirl19: My partner Tyson [Wheeler, the director of the show] and I, we believe a la carte services like Vimeo On Demand are the future of how people will be experiencing content, especially if you look at HBO Now, which I predicted a few years ago. Bundled cable, an outdated model, is finally starting to die out a bit. Vimeo is a part of that. We are putting ourselves on the forefront of this paradigm we see happening. We don’t believe our viewers will buy off YouTube because they come to YouTube for free content, so we decided to up our production and runtime, and we went to Vimeo.

TF: Have you noticed any interesting differences in the ways your fans consume your videos across YouTube and Vimeo?

CBG19: We’ve been putting premium content on Vimeo On Demand. It has much higher production value. We’re at that next step where it’s time to leave the nest a little bit and do other things. It’s time to make higher quality content.

TF: Why do you think your fans pay for content when you have so much of it available for free?

CBG19: We’ve had a really loyal audience. We do have a small percentage of people who support us monetarily for whatever we’re doing. They’ve made it possible to take these next steps by supporting our Kickstarter campaign and buying our shirts. I believe they want to see us continue to grow because they like what we’re doing. They ask us, “What can they do with more of a budget?” They want to see that and we can provide it for them thanks to this wonderful ecosystem.

TF: So what in particular do you do to make these new videos more premium than what is available for free on YouTube?

CBG19: For Epic History X-Men Volume 2, we built an entirely new set, which took a lot of time and money. Research takes a long time. We do very in-depth videos that require me to do a lot of reading and thinking. I have to buy a lot of comic books and movies.

TF: This is similar to something you hear a lot from creators who are using platforms like Vimeo On Demand and Vessel. It’s not just about increased revenue, it also frees up time to do more involved work because they’re not constantly producing enough videos to make a living from ad revenue. Is this something you think applies to your work?

CBG19: That’s absolutely a thing. We feel YouTube, in a way, supports shorter-form. You have to constantly produce content to keep your audience happy. What you can put out isn’t always as satisfying. We have lots of ideas for videos, like more things with puppetry and all sorts of weird things, but we don’t have time. Our work is more exciting and has more substance on Vimeo. The funding with that is so much more than what we receive from YouTube. A lot of people have never bought content before…we want to encourage “cyber-patronage.” We want to continue to make the stuff we want to make, and not be censored by anyone else. We have to stay independent. That’s the dream: We make something, they love it, we pour their money into new and better projects.

TF: Online video is predominantly skewed toward short-form content. Why do you think long-form videos have done so well for you?

CBG19: We believe short-term attention spans are kind of a myth. It’s the quality of content that matters, more so than the time. There are a lot of younger people on the Internet, and a lot of the younger people really do have more of a shorter attention span, but there are also millions of other people who have longer attention spans. There’s a hole in the market beyond superficial discussions about art and popular culture. We’re creating more of a complex conversation about movies and pop culture, for people who want something to sink their teeth into. It’s YouTube’s platform that rewards shorter videos, because someone on YouTube makes the same with a one minute video as with a long one.

CBG19: I believe there is a place for short-form video content on demand. You would have to release a series, and people would pay to see the whole series. You would have to offer them a longer version of a short-form series. You also need to have a higher production value for content, as opposed to “bedroom vloggers.” What we do is a whole new level of production. But also, I feel long form content is a natural fit for stuff like Vimeo On Demand, because of the YouTube ad revenue model. We’ve always been an anomaly on YouTube. It’s just a natural progression for us to go to Vimeo On Demand, where we’re rewarded for the effort we put into our videos.

Our top selling Vimeo On Demand project, the Epic History for House Baratheon, made as much money as a year of advertising revenue on our whole YouTube channel. It’s a small audience buying it, and our views are far less than on YouTube, but at the end of the day, if it doesn’t make dollars, it doesn’t make sense.

CBG19: YouTube has never been our endgame…We’ve always planned on fitting our audience into that new wave of cyber-patronage. We want our audience on board. It’s a beautiful new world out there for artists who want to keep pure control. That’s of paramount importance to us: not being censored.

You can check out ComicBookGirl19’s ad-supported videos on her YouTube channel and her more in-depth, higher-production-value, and pay-to-view uploads on her Vimeo channel. You can stay up to speed with all her creative endeavors and social media accounts on ComicBookGirl19.com.