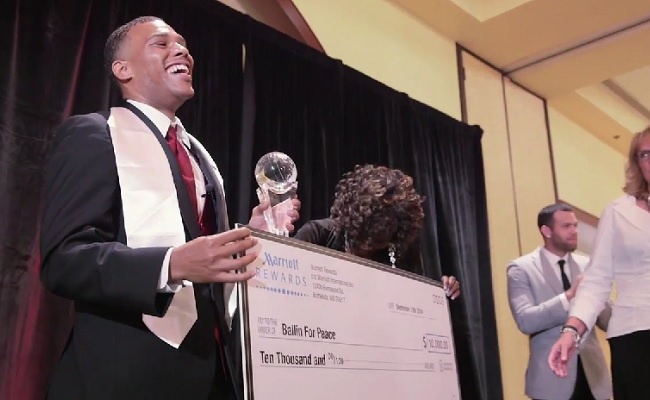 Marriott International’s new Red Bull-style digital content studio has several new productions underway to help gain the attention of the younger generation of travelers. The Marriott Content Studio recently launched the Year of Surprises web series and has announced several new development deals, including partnerships with YouTube and Snapchat stars and the producers of Ghost Whisperer.

Year of Surprises was developed for the 30th anniversary of Marriott Rewards. With the same concept as Zoe Saldana Presents My Hero on AOL, Marriott’s web series shows a celebrity giving the surprise of a lifetime to a nominated, deserving individual. In the most recent episode, basketball star Jordan Farmar of the Los Angeles Clippers honors Ryan Hicks, the co-founder of non-profit Ballin’ for Peace. Marriott has ordered 15 episodes in total for production, all slated for release by December 2015.

Additionally, Marriott Content Studio signed Jack and Finn Harries of the YouTube channel JacksGap to create three short films about global travel. In the films, the twin vloggers, who boast over 3.8 million subscribers and run a popular digital hub about their travels, will feature destinations from among 78 countries where Marriott’s brands are based.

The hotel chain’s studio also entered into a co-production deal with Naritiv, a Snapchat-focused analytics and marketing platform. The two companies will create an interactive series on the Snapchat platform, featuring some of its leading celebrities like Casey Neistat and Mike Platco. Finally, Marriott Content Studio is teaming with Ghost Whisperer producers Ian Sander and Kim Moses of Sander/Moses Productions & SLAM to develop a dramatic, scripted digital project for the hotel chain’s brand.

“Our goal is to produce engaging content that builds communities of people passionate about travel that will drive commerce,” explains David Beebe, Marriott’s vice president of creative + content marketing and global marketing, in the release. “These deals expand both the depth of our content play as well as its breadth, by reaching into a new content area where few brands—and no other hospitality brands—have ventured before as [we] activate and leverage global reach and distribution to become the leading publisher of travel lifestyle content that engages next generation travelers.”

Once these deals come to fruition and the new content is released, Marriott will have to see if their efforts do indeed keep young travelers interested in staying in its hotels and sticking with the brand no matter where they may go.