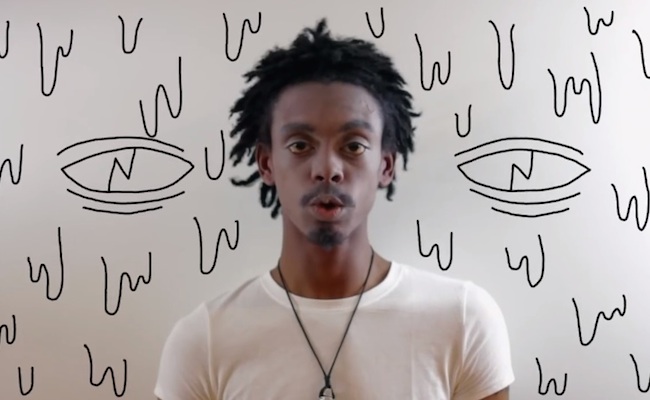 Hal Williams, better known as rapper and producer Pyramid Vritra has released the latest visuals for “Spool” from his debut record Indra.

Writing and making beats since he was 10 years old, Williams got his start in Atlanta, first linking up with the NRK collective and then releasing music as The Jet Age of Tomorrow with Matt Martians via Odd Future. Now based in LA, the soft-spoken rapper has a lot to get out with this first release. The video is a complex set of images, which are at first grounded and then seemingly unhinged from reality.

“Spool” has the air and feel of an artist who is just getting started showing us what he can really do.

Williams’ obsession with metaphor and juxtaposition is something the rapper tackles at length on the record. He describes this emotional layout as a “fluidity and calm in the midst of complexity.” That sentiment perhaps helps explain the videos many scenes that are ripe with complex imagery and metaphor set against simple shots of LA graffiti.

Extending the metaphor of calmness set against disorder is the rapper’s day job. When he’s not producing his own beats (there are no samples on the record) or rapping, Williams works in an LA area hardware store. This lends credence to the multifaceted nature of Pyramid Vritra as an artist and further solidifies this rapper as someone to follow.

Indra is out now on Stones Throw Records. Purchase the record here and subscribe for more from Stones Throw.