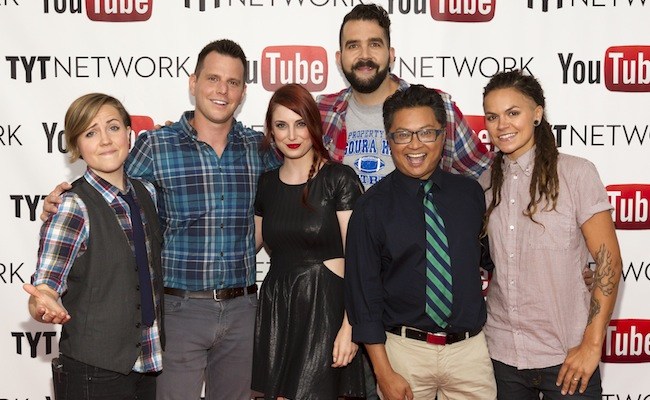 YouTube, The Young Turks Are #ProudToLove, Get Used To It

On Thursday evening, The Young Turks partnered with The Rubin Report and YouTube to host a panel and party to celebrate their #ProudToLove campaign and the supreme court decisions on DOMA and Prop 8.

After introducing his panel of Jonny McGovern, Hannah Hart (My Drunk Kitchen, Hello Harto!), Whitney Mixter (The Real L Word), Alec Mapa (Showville), and Bree Essrig (BREEessrig), host Dave Rubin began the night by asking the panel how they were feeling about the striking down of DOMA.

Alec Mapa immediately brought up a memory of a time in which he had to go through customs with his husband and son, but the agent informed him he and his family were not allowed to pass through as a single unit. For him DOMA means, “We’ll be able to go through customs like everybody else. And that seems like kind of a trivial thing, but it did matter.” For the still single Jonny McGovern, DOMA means that when he has his “Coming to America-style wedding” featuring Aretha Franklin, “that extravaganza will be federally recognized.” 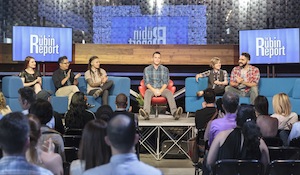 When the topic of gay marriage opposition came up, Mapa again led the answer with what everyone was thinking, “I’m really kind of astounded every day by how much anybody gives a shit.” He went on to add, “If they knew what my life was like—what my gay marriage looked like, if you tuned into my house, you would see my husband and I folding laundry while our kid is asleep after 8:30 watching So You Think You Can Dance. And that’s the big ‘ooga booga.’ That’s what people are terrified of.”

Mixter and Hart later discussed the hatred that comes from the sort of people who compare the right of gay marriage to that of marrying a dog. Mixter brought up the stupidity of the comparison, and Hart added, “People who are throwing this stuff out there and then running away, those are the people that we don’t have to actually feel uncomfortable around, because they make themselves look like idiots.”

While the issues of politics and hate were discussed, the night was ultimately a celebration of love and big steps in the right direction. Just before the party portion of the night began, Raymond Braun from the YouTube marketing team gave a speech stating that YouTube was spending two days exclusively featuring LGBT content and that Google would be linking directly to the Pride hub from the Google homepage today. On a more personal note, he said:

“One of the things I love about my job working with the LGBT community on YouTube is that sometimes I hear from teenagers and young people across the country and across the globe and I get messages from people that talk about how they might live in a community or a home where they don’t feel comfortable being out or they don’t feel like they can connect or meet a lot of people who are in the LGBT community.

In this last week of Pride Month, YouTube has launched the #ProudToLove campaign, encouraging all users to upload videos talking about what or who they are proud to love. The movement is turning YouTube into a huge celebration of love and openness, and the company has been as vigilant in promoting the campaign as Braun promised. YouTube.com/YouTube has been completely taken over by the initiative.

Check out some of the videos, submit your own, and show how you are #ProudToLove.