Last week a new interactive fictional thriller web series Guidestones launched on YouTube, inspired by the real mystery of the Georgia Guidestones, large granite slabs inscribed with directions on how to rebuild society after the apocalypse. 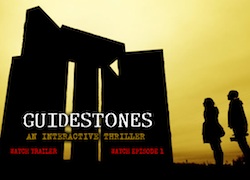 Now the series is set to run on Hulu in a slightly altered form by spring, C21 Media reports.

The interactive 50 episode series contains embedded clues that viewers can uncover and explore hidden story lines. The series was created by iThentic and 3 o’clock TV, and centers around the mysterious Guidestones monument, the so-called “American Stonehenge” outside Atlanta in Elbert County, Georgia.

Dramatic and documentary filmmaker Jay Ferguson directs the vérité style series which features locations in Canada, the US, and India:

“Sandy Rai, an exchange student from India studying journalism in Canada, stumbles upon an unsolved murder while working on assignment with fellow student Trevor Shale. She learns that the murdered man, a scientist named Harold Glenndenning, may have a connection to the builders of The Georgia Guidestones. Following clues hidden within The Guidestones she discovers that Harold’s death was no random act, and is instead part of a cover-up hiding a global conspiracy of apocalyptic proportions.”

Like mysterious monuments with sinister auras? Check out out coverage of Stephen King’s ‘N’.