‘Escape From City 17’ is Back with Part Two (Finally!) 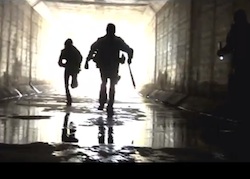 There is no more tortured group of fans in all of gaming than Half Life fans. While other franchises like Halo and Mass Effect deliver the goods reasonably on schedule, they have been waiting almost four years for publisher Valve to release a true sequel to Half Life 2. Salivating for the next installment of scientist turned badass sci-fi messiah Gordan Freeman’s story, the Half Life junkies snatch up any piece of content related to the universe.

They got something back in February 2009 when commercial directors The Purchase Brothers (David and Ian Purchase) debuted a Half Life inspired low budget special effects heavy short film titled Escape From City 17. With it’s impressive production values, it quickly gained massive views—over 5 million—and critical acclaim. Now more than 2 years since the original, the sequel has finally arrived online. And while it is sure to satisfy the starved Half Life fans (more on them later) the sequel falters in capturing the awesome power of the first.

Where the original Escape From City 17 was barely four minutes long, part two comes in a mean 14 minutes. Original characters from part one appear later in the short, but first we’re introduced to a new duo of resistance fighters. This tandem of a Eastern European blonde and gritty resistance “bro” are a clear attempt to inject some drama into the film, but do we need lines “I haven’t been given a gift in over a decade” when viewers are turning in for kick-ass Half Life action?

Speaking of action, it’s on full display here. Using the assets from the games, we’re treated to some pretty epic battles, including one with a enemy tripod (“strider” for the HL junkies out there) that is thrilling. The depth of field in these battles is awesome, as other resistance fighters and enemies fill in the landscape in a way better than the original. Once again, it’s amazing to see how easy Hollywood level FX can be created for web content like this.

But speaking of Half Life web content, Escape From City 17 is no longer alone in the fan-made film realm. In January, fan film Beyond Black Mesa premiered online and quickly scored over 1.6 million views. And earlier this week, Portal: No Escape, inspired by the Half Life universe games of the same name, premiered and has already scored over 2 million views. It’s a burgeoning sub-genre and with all these films ending semi-ambiguously, the market and the Half Life junkies are satisfied, after all it’s not like Valve is putting out any new Half Life content any time soon.

Escape From City 17 -Part One:

Tim Goessling is a contributing writer for Tubefilter and Half Life junkie. You can read more of his writing at www.thislalife.com.