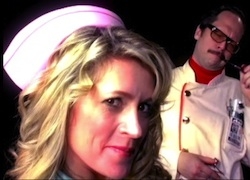 Deep in the far-flung future, a motley band of heath-care workers roam the nether regions of space – located just behind the Big Dipper – looking for love, adventure and a steady paycheck. These are the men and women and robots of Space Hospital.

Space Hospital can most easily be described as the union of a 70’s scifi series with the early episodes of General Hospital, back when the soap focused on hospital drama and not the glorification of mob violence. (What?!? It’s a guilty pleasure!)

Creating an intentionally retro, kitschy series is a smart move as replicating the visual effects of recent scifi blockbusters like Avatar would be nearly impossible on a web series budget. While the show’s visual style and campy feel, obviously, will not appeal to everyone it does serve a purpose. “It looks like a kid’s show,” states series creator Rob Poe, “[b]ut underneath that façade is something a lot darker and less distinct – whimsy with an undertone of menace.”

Like many independently financed web series, Space Hospital is produced on a shoestring budget. Poe creates all of the show’s various props by hand from household objects and odds-and-ends. The dedication of the series’ cast and crew has earned them the respect of their peers. Web series producer, Sandra Payne describes Space Hospital as plucky and admires the fact the series does not look like any other show.

Beneath the cheesy surface of melodrama and comedy lies a level of depth easily missed if the show is dismissed as a kitschy pastiche of 70’s sci-fi and for its middle-school set design. The series deals with current issues such as rampant consumerism and health care rationing and extrapolates, to an absurd extent, the far-flung ramifications of such behavior. Fortunately, the show gamely avoids becoming bogged-down or preachy when dealing with such heady issues, while still offering some solace for those seeking substance within the spectrum of silly sci-fi.

“If you… prefer black comedy to broad comedy and sport a persistent, low-grade existential crisis,” states series producer Sue Stoebner, “then there is a bedpan with your name on it waiting for you at Space Hospital.”

Currently, in its second season, Space Hospital is available on YouTube, Koldcast, as well as the show’s own website. The producers also maintain a behind the scenes blog featuring episode recaps, production information, and a science section that details how the series’ absurdity eludes to real science.