Despite the 9:30 am call time and an hour lost the night before due to daylight savings, SXSW attendees turned out in droves for Tubefilter’s panel Decision Trees: YouTube’s New Breed of Interactive Storytellers.

Tubefilter Co-Founder Marc Hustvedt led a stimulating discussion with Rafi Fine of Fine Brothers Productions and Tony Valenzuela of BlackBoxTV and DeFranco, Inc.—two of the best and most creative of YouTube’s new breed of interactive storytellers.

YouTube’s annotations tool opened up a whole new way telling stories, with the rise of interactive videos that let viewers “choose-their-own-adventure” as they navigate through the story.

The panel jumped right into a demo of TheFineBros‘ interactive 2010 Year In Review Shooting Range, during which Hustvedt prompted audiences to call out their choices. We navigated through the Antoine Dodson storyline, answering questions (incorrectly at first) in an 8-bit video game featuring a lo-fi version of Auto-Tune the News‘ Bed Intruder song. The interactive story was comprised of 22 videos, Fine remarked, but some of their games, like The American Idol Interactive Experience, featured over 50 videos.

BlackBoxTV creator Tony Valenzuela shared his process in creating dramatic interactive narratives. In Green Eyed World, YouTube’s first project that employed Facebook Connect to integrate live Facebook comments on the show page, featured annotations that aided in the creative decision process—leading to a bigger storytelling experience. Valenzuela explained that he decides to use narrative interactivity “when the story demands interaction to propel itself forward.” 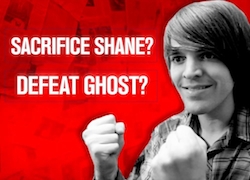 Valenzuela shared an interactive video he made with Shane Dawson called Haunted House Party *Interactive Game* which Featured Tay Zonday, iJustine, and a host of other YouTube superstars. “The important thing is to include clear instructions,” Valenzuela noted.

Both Fine and Valenzuela agreed that what they are creating is just the tip of the iceberg. “20% of our views are on mobile, which doesn’t feature annotations” said Fine. “So we need to find new ways to engage audiences. Valenzuela gave us a sneak peek of Find Me, a new live interactive series starring Taryn Southern. “I was inspired by lonelygirl15,” said Tony, “where viewers thought they were interacting with a real person.” The ambitious project features an opportunity for fans to actually get in their cars and drive out to witness the finale live.

“The internet is not a passive experience,” concluded Fine. “Interactive stories showcase what you can do on YouTube but annotations are still limited.”