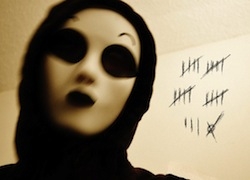 Marble Hornets is a YouTube and Twitter-based ARG-mockumentary that has been ongoing since the first video was posted on June 20, 2009. The channel has, in a year and a half, gained 41,741 subscribers and has racked up an impressive 8,943,042 upload views. The ARG is on its second season, with the first ending on April 19th, and the second beginning with three pictures posted to their Twitter account over several days in October and November. The protagonist, called simply “J”, soon after uploaded a new video beginning the season in a new location with a continuation of the story in a new mystery.

Season one revolves around the posting of tapes given to J by his friend and film student Alex Kralie. Alex had been working on his student film, Marble Hornets (where we get the title of the YouTube and Twitter accounts). Alex suddenly began buying absurd amounts of tapes and recording himself at all times, then abruptly dropped the film project with no explanation. He told J he planned to burn the recorded tapes but J convinced him to hand over the tapes before Alex moved to another school and stopped all communication. After forgetting about the tapes for three years, J finds them in a box in his closet and begins uploading the interesting parts as Entry #1, #2, etc.—think episodes—as a way to solve the mystery of Alex’s behavior and disappearance.

Over the series of entries, comprised of both Alex’s tapes and interviews and new recordings from J, we are introduced to cast members of Marble Hornets and a mysterious tall, slender figure in a suit that seems to be following Alex, causing him to become increasingly panicked and paranoid. As J investigates the videos and locations surrounding Alex’s turn for the worse, he finds himself also becoming paranoid and even becomes ill. J appears in some of Alex’s previously recorded videos though he has no memory of being present. A masked figure also appears in the videos, assaulting J and later seen in J’s room while he is asleep. The figure, affectionately nicknamed “Masky” by the fandom, is also believed to be posting videos in response to the Entries under the username “totheark.”

Season two begins with J waking up in a hotel room seven months later with no memory of the past several months or how he came to be in the room nor where he is. Though only four videos in, the audience has been introduced to a new character and presented with new questions.

The plotline and antagonist are based on a thread at the SomethingAwful forums where the myth of the “Slender Man” was created from a series of images manipulated with Photoshop to include appearances of a tall, slender figure with a suit and a faceless appearance. Creators Troy Wagner (director/”J”) and Joseph DeLage (Alex) are film students and members of the SomethingAwful forums and have done a radio interview on the project.

Most of the videos contain strategically placed audio distortions and visual tears, adding to the homemade, realistic appearance of the videos as well as adding an element of the sinister and mysterious. The distortions and tears are believed by many fans to be caused by the proximity of the Slender Man or his masked accomplice. The series is all shot with handheld cameras borrowing from the style of The Blair Witch Project. The videos are just creepy enough to make you look twice at shadows and keep you up at night checking outside for the Slender Man.

For those interested in horror and suspense themed web series as well as interactive ARGS, Marble Hornets can provide a more low key form of entertainment. The Twitter account and YouTube page are the only official forms of plot, so there is not a lot to sift through and decode as in many previous ARGs. J responds to viewers on YouTube, though comments for videos have been disabled. Because of the lack of comments, a Wiki page and several forums on Unfiction and SomethingAwful have sprung up to discuss the ARG.

All in all, Marble Hornets has thus far produced an intriguing interactive storyline with plenty to speculate about in forums and social networks, and season two brings with it the promise of more jumps, blackouts and plenty of Slender Man for everyone.