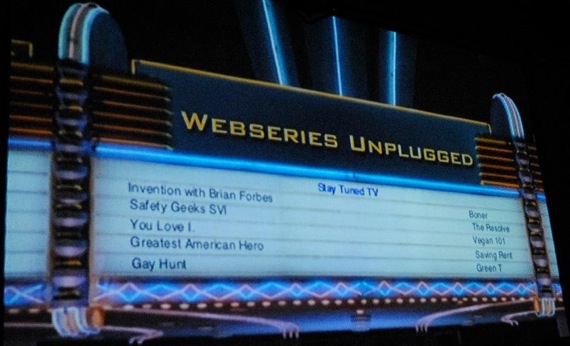 Every first Tuesday of the month the little eastside haunt of El Cid will now be overrun with web series creators thanks to promoter Michael McCarthy. Tubefilter caught up with Michael to hear about the new web series night he’s dubbed ‘Web Series Unplugged.’

Tubefilter: How did the web series event get started?

Michael McCarthy: I started a short film show about a year and half ago and there didn’t seem to be an outlet for something like this. It also seemed to be a good addition to the event at El Cid, and i started getting a lot of webisode content which was a different asthetic and than I got with the short film show. So I decided to put a second screen outside El Cid in the courtyard for the web series content, and now the web series show is in its third month, and going strong.

Tubefilter: What is the submission process?

Michael McCarthy: The submission process is mostly me meeting filmmmkers and web series producers at the show, and then them talking to me, and then I can check it out the content, and see if it seems right for the show, then i book it. I basically apply band night principals to the evening so it feels like a little mini film festival for web series. There’s no official submission scenario. People can find me on Facebook and submit there, or via email: themightymac[at]gmail.com.

Tubefilter: What is the ultimate goal of the El Cid show?

Michael McCarthy: For me obviously, I want it to be very successful so El Cid will allow me to do it as long at it is well attended. Number two, the thrill of getting the content in front of a live audience, which isn’t always the case for web series content. The filmmakers, the people behind they projects, they don’t always get to see how their work is connecting with people. Sometimes they are just in a bubble, reading YouTube comments. My ultimate goal is to have succesfful night to have people enjoy the art form. Also, the excitement the teams get when they get to see it with a live audience is really cool. Right now, it’s really about building the community and having fun really, and if it goes into something greater than that, then I will explore that. It’s really just about getting it off line to see how people connect with it, that’s why it is web series unplugged…. Dave and Tom (current show hosts) from Safety Geeks coined that phrase.

Tubefilter: What have been some audience favorites lately?

Michael McCarthy: There’s this show called Time Dealer about a guy who goes back in time and deals drugs to notable people in history and it’s really funny, and it’s got an edge to it. That was submitted to me to play short film and night, and then I realized with the help of the Safety Geeks guys there’s all this web content out there, and we started the web series night. I just really want people who can possibly benefit from the screenings to get involved.

Tubefilter: Has anyone screening their series in the show had any bites on their projects?

Michael McCarthy: People have scouted writers and cinematographers to collaborate. The web series night is so new, so I hope to see more of that as it grows. I am super impressed with the viatilty and creativity in the web series community and i look forward to growing the show. I also look forward to many great nights to come, I’ve had fun doing it. I’m very inspired.

The next ‘Web Series Unplugged’ night will be September 7th at El Cid beginning at 8pm. You can email Michael directly to submit to future events: themightymac[at]gmail.com