How To Raise Money For a Web Series with Kickstarter 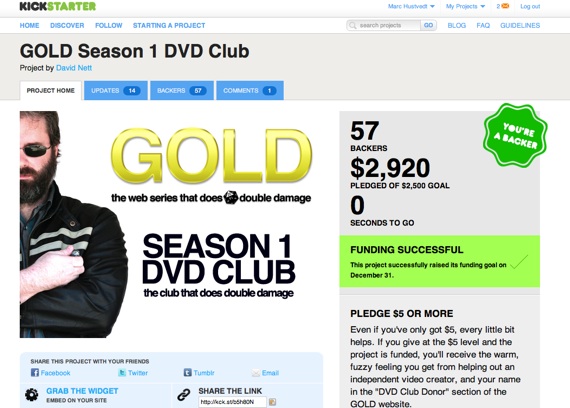 Creating a web series is challenging at every step, from production to marketing, but perhaps the biggest hurdle is among the first: getting money. Kickstarter, a site for crowdsourcing arts funding, is increasingly become the go-to source for web series creators unable to secure grants, industry money or private funds to get production going. We Are With the Band, for example, used their Kickstarter funds to upgrade their camera and sound equipment. GOLD used the site to finance their first season DVD.

Kickstarter is simple. Creators develop a pitch on the site, using video, text or both. They set a fundraising goal and have 30 days to reach it. Users donate money – it’s not an investment – to the projects and if the project reaches its goal, creators get the money. For more information, click here.

“We like for Kickstarter to be a tool,” co-founder Yancey Strickler said, noting how funds can be used for anything from production to traveling to a film festival. “We’re happy to just fill in gaps or be a way to get from X to Y.”

Over 5,000 projects have used Kickstarter for funds, and of those just under half have reached their goal. But the number of projects is accelerating: 2,500 campaigns are currently in progress and 300 new projects are added each week, Strickler said. 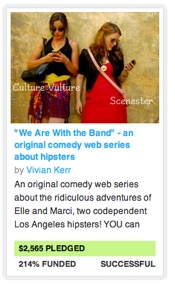 How many web series are using Kickstarter? I found over 100 producers who are currently soliciting or have already solicited funding through the site. I decided to take an informal snapshot of 100 of these projects and crunch some numbers. I also took a look at some of the most successful pitches to see what works and what doesn’t.

First, the facts. Out of 100 projects I chose on Kickstarter, 28 reached their funding goal, 40 were unsuccessful, and 32 projects are still working on it (of those, only three are more than 70% of the way there). All in all, more than $200,000 had been pledged to web series, and the vast majority, about $180,000, is already in the hands of producers. That’s a lot of dough! Among those projects that reached their goal, the average sum received was about $6,400.

Web series pitches seem to make it about 40% of the way toward their desired goals, which isn’t bad. It’s a steep curve, however. Most projects never make it past 10%, though several projects raise much more than they asked for. So how do you become one of those few success stories? Take the example of “Little Brass Bird,” a web series starring adorable plush toys. Little Brass Bird is a very modest project by web series standards. The producer team had a goal of $1,200 and eventually raised $1,427, or 20% above the their goal. How did they do it?

“We promoted and networked the heck out of ourselves,” writer-director Rhodrick Magsino told me. He and artist Robin Poppert were on all the usual suspects: Facebook, MySpace, Twitter, YouTube and Flickr. Facebook helped them reach out to friends and their friends; MySpace helped spread the word to the fans of the bands developing music for the show.

But much of money came in the old fashion way: showcasing their show. “The real spike in funding occurred when we released our first teaser episode. Once people physically experienced the show’s potential, the pledges just started rolling in,” Magsino said. The producers used the funds to buy rights, merchandise, production materials, and establish their business. The show is being screened at the Kickstarter Film Festival in Brooklyn tonight.

This doesn’t seem like advice, or perhaps it’s too obvious, but it helps to think about your audience. A good idea should make someone think: “I want to see that!” It doesn’t have to seem traditionally popular – web series should be different! – but it should interesting to a passionate group of people. For example, web series creator Steve Cooper raised $3,000 for a talk show using a simple video but a catchy tag line: “bringing you people you’ve heard of but never heard from.” A couple of series marketed themselves to thoughtful subcultures: Ultimate Energy Showdown addressed fossil fuel consumption, while Perennial Plate targeted sustainable eating. A coherent, simple, catchy idea is easier to market.

Don’t forget to add on perks with individual pledges: a thank you on a website, free stuff, and special access. “Offer people something of value in exchange. So it’s never a donation. It’s something that’s little bit in between patronage and commerce,” co-founder Strickler said.

Kickstarter’s “up to 90-day” deadline is one of its best features. Anyone who has ever listened to public radio knows one thing: deadlines are annoying, but they force donors to act. They work.

Coordinate a campaign geared toward building momentum. Obviously use Facebook, Twitter and the plethora of social networking sites to drive traffic to your Kickstarter page (search for “kck.st” on Twitter and you’ll see this is already common practice). Reach out to media: if your web series fills a particularly niche (sci-fi/fantasy, lifestyle, politics, sexual orientation, race) there’s bound to be a blog or two willing to give you some free promotion. Think about who would be interested in your series and search for all the places on the web where those people would frequent: from forums, fan sites, Facebook groups, Ning communities, university student organizations, the possibilities
are, if not endless, manifold.

Among the shows that don’t get money, one of the most common mistakes are vague or short descriptions of the project. If people are going to give even a few dollars, they want to know exactly what they are donating to and what it is going to look and feel like. Vague descriptions and loose details only inspire suspicion. Most basically, have a name for your project! “New Drama Webseries” won’t get anyone excited; every funded project I saw had a name, long or short (mostly short).

For a web series, a video pitch is necessary, even if it comprises just you in front of the camera. A montage of images or a single still does little to encourage potential donors of your camera skills.

Lastly, make sure you specify what the funds will be used for. Do you need money to set up your production company? Rent equipment? Pay for editing and other post-production services? A plan of action communicates seriousness.

Everyone talks about Joe and Jane Doe, but they never get any funding. Donors need to know you are capable of delivering on what you promised. Even in charity, no one wants their money wasted. In your video pitch or in the text below, describe what makes you capable of filming and distributing a web series. Include a list of past projects, awards, degrees or production partners. Link to a resume or homepage. It’s equally important to sell yourself as much as the series itself.

In their video pitches, a number of the most successful producers showed advance work on their series, either the trailer – as with Little Brass Bird – or a few clips or scenes. Anything you can do to give a sense of what the project will look and sound like helps.

Not everyone has an amazing personality or an eye-catching look, but good personalities grab eyes and inspire. In your video, try to be entertaining and positive. The creators of We Are With the Band cut a basic video detailing the top 10 reasons to donate to their project, stating such reason as the LA-based show is produced by women and “because Entourage is not the real LA.” They went on to raise more than double what they were expecting. For his Superhero web series, Steve LaMorte cut a simple,
dry, yet humorous pitch mixing shots of his production process alongside witty asides.

“You have to be a person. These things succeed when they’re particularly human experiences, when there’s emotion to get involved in, when there’s a story to care about,” said Strickler.

If you aren’t the life of the party, at least be modest but confident. When all else fails, do what Brazilian web series caRIOcas did: show some skin.