Is ‘Bud House’ The World’s Most Expensive Online Reality Show?

World Cup buzz is at a fever pitch around the world as the opening games of the tournament kicked off today in Johannesburg, South Africa. Brands like Nike, Carlsberg, Addidas, and more, are spending millions of dollars to take part in the month-long global fête which costs a hefty $1.5 Billion to produce.

Returning for the seventh time as the ‘Official Beer’ of the FIFA World Cup, Budweiser and its new owner (as of 2008), Anheuser-Busch InBev, is launching an international advertising campaign of unprecedented scale, with Budweiser television spots in 20 countries worldwide, a massive search campaign, and rich media and interactive components spread across social networking sites and leading content outlets.

“Digital and experiential marketing will be at the core of our connection plans to unite football fans in ways we have never done before in past World Cups,” said Chris Burggraeve, chief marketing officer of the Belgium based company, the world’s largest brewer with a stable of over 300 beverage brands. “The 2010 FIFA World Cup South Africa presents an unparalleled opportunity for us to fully leverage our new found scale and expanded brand portfolio for the newly formed Anheuser-Busch InBev.” 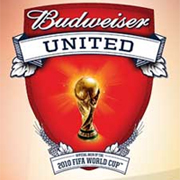 The campaign will unfold under the “Budweiser United” banner and will drive viewers and fans to the BudUnited site, which happens to direct its traffic to BudUnited’s sponsored YouTube channel. At the center of the campaign is the web’s most ambitious reality series to-date — Bud House. 16 men and 16 women from 32 different countries (as diverse as Cameroon, Ghana, North Korea, Brazil, France, Honduras, and the United States) will live together in a stunning villa in Cape Town where they eat together, sleep together, and watch every match.

As the Cup progresses, these so called ‘fans’ will be eliminated as their country’s team is eliminated from the competition. According to a press release from AB-InBev, the fans “will be grouped together in dorm-style rooms determined by the World Cup draw.” That means that “since South Africa, Mexico, Uruguay and France are in Group A of the World Cup, then the fan representatives from those countries will bunk together in the same room to create more dialogue, and perhaps even more tension as they root for their country’s team.”

On July 11th, the last fan standing will present the Man of the Match trophy (which Budweiser is also sponsoring) to the final game’s Most Valuable Player. Throughout the tournament, viewers can also vote for Man of the Match via SMS or on the Bud House website. 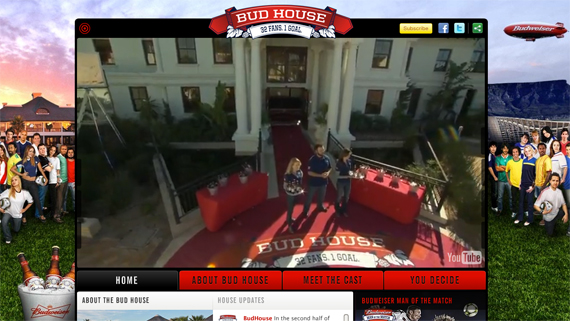 Casting for the series took place around the world in March, and integrated a heavy interactive element involving viewers from each fan’s home country.

What’s clear, however, is that the series is geared towards an American (or English speaking) audience. 32 fans from 32 countries, including Algeria, Ghana, North Korea, and they all happen to speak english.

Each fan in the house has a Bud House Facebook Page and a Twitter account: There’s Beate from Germany, Emiliano from Mexico, and Ayouba from Côte D’Voire, to name but a few. Each fan will be pushing out customized content and videos on a daily basis. This content, incidentally, will be delivered in the contestants native languages.

You could call this branded entertainment, sure, but the Bud in ‘Bud House’ (not BudHouse) plays a backstage role to the show’s primary star, the sport of football (or as we yanks like to call it, soccer), and its most celebrated event of the year.

Unlike other television based reality shows, like Survivor or Big Brother, which are shot well in advance of their air dates, the Bud House production team will have ridiculously short turn-around times for each episode and piece of video content they release.

Six to eight episodes will air each day, and some may even stream live. Although the videos are being uploaded independently to the Bud United YouTube account, they’re also using a custom flash installation on the channel page itself, with embedded tools that aren’t available in the standard YouTube player. Throughout the course of the series, viewers will also be invited to influence events in the house through a ‘YouDecide’ polling tool.

Content from the series will be promoted via the worldwide campaign on television, search, and online display advertising, as well as in public venues around the world (like New York’s Times Square) and in World Cup stadiums in South Africa.

The campaign was dreamed up by and is being executed by DDB and Tribal DDB, divisions of the Omnicon Group, while the series itself is being produced by Ridley Scott Associates, the eponymous umbrella company owned by English director Ridley Scott.

The global “Bud United” campaign will also be complemented by extending local sponsorship rights to its leading brands in markets like Brahma in Brazil, Hasseröder in Germany, and Harbin in China (although AB-InBev isn’t exactly shying way from spending dollars on Budweiser in China with their Bud Babe campaign).

How Big Is Bud House

With annual revenues of $36.76 billion USD in 2009, AB-Inbev has some of the deepest advertising pockets in the world. After InBev’s acquisition of Anheuser-Busch in 2008, concerns were widespread that America’s most venerable beer brand and the nation’s 22nd largest advertiser, which had total advertising expenditures of $1.36 Billion in 2008, would radically reduce its ad budget. Quite to the contrary, AB-InBev increased Budweiser’s ad budget by 18% in the first quarter of 2009.

Now, less than two months ago, in a landmark deal, AB-InBev and PepsiCo joined forces in a media buying pact to pool their $1.36 Billon is U.S. media dollars.

While it is difficult to predict how many tens of millions of dollars have been set aside for Bud House and its associated media buys, it isn’t difficult to imagine that the investment is quite substantial, given that AB-InBev has publicly stated its intention to transform Budwesier into the #1 global beer brand.

And, what better event than the World Cup to turn that dream into a reality.