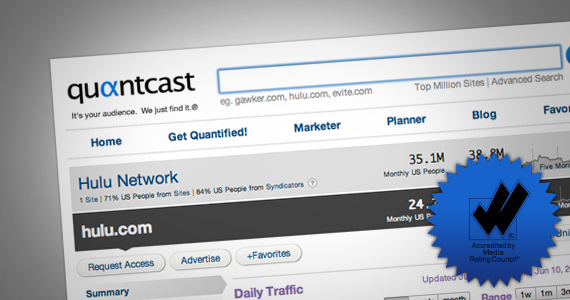 Yesterday, four year old Quantcast, the media measurement and analytics company, which has raised over $50 million dollars to date from investors led by Founders Fund and Cisco Systems, scored a major win against its rivals, ComScore and industry heavyweight, Nielsen, in a bid to land Media Rating Council (MRC) accreditation for its syndicated online audience measurement service. Both Nielsen and ComScore’s competing online measurement services, NetRatings and Media Metrix, respectively, are currently under audit review by MRC, and have been for quite some time.

The MRC, which was established in 1964 at the behest of Congress as an alternative to government regulation of the broadcast industry, has long been the gold standard of ratings accreditation in fields as diverse as television, radio, multi-media, and print. Until now, their internet accreditations have been limited solely to publishers and ad networks — Quantcast is the first syndicated ratings measurement service to receive the official MRC stamp of approval.

“We were impressed with many of the innovations introduced by Quantcast,” said MRC Executive Director, CEO George Ivie. “Its accreditation is a notable step in the continuing evolution of the state of online measurement.”

Recognition by the Council doesn’t guarantee adoption by the advertising industry, of course, but it does bring a measurement service one step close to becoming a standard currency for media buyers. It also brings with it the highest level of possible compliance with the Interactive Advertising Bureau’s advertising impression and audience reach measurement guidelines.

While Quantcast’s Quantified Publisher service is focused exclusively on measuring web traffic, the company has been actively collecting and measuring video metrics for over three years. With the rapid expansion of ad dollars flowing into online video, development of a measurement standard will become an increasingly urgent pain point for the industry.

Quantcast’s announcement this week could give it a decisive edge as it goes head to head with Nielsen’s Video Census service (also currently under MRC audit review) in the video measurement space. While this development is probably making the folks at Nielsen sweat, competition is not only good for advertisers but also for online entertainment content creators — it might even lead to adoption of an industry-wide standard for view counts. An MRC endorsed online video measurement service with the support of Madison Avenue, could even open up YouTube’s black box to 3rd party verification. That’s an outcome it would be hard to bet against.