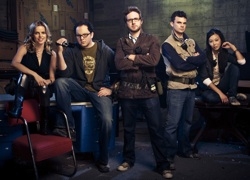 Considering I produce a ghosthunting parody show of my own, the subject of Ghostfacers is one very near and dear to my heart: a group of “professional” ghosthunters documenting their investigations with hilarious results. This first season, the team is tracking down the spirit of a murdered actress (played by Kelly Carlson of Nip/Tuck) who was forced to watch herself get her face slashed in the theatre dressing room where she performed.

What is even more interesting about the show itself is the story of how it came to be. I had a chance to interview AJ Buckley (CSI: NY, Skateland) who plays Ed, the team’s enthusiastic leader, and Travis Wester (Euro Trip, Cold Case) starring as Harry, the co-founder of the team and tactical specialist, about the shows origins.

“GhostFacers was an incredibly original idea developed and written by Ben Edlund, one of the writers on Supernatural“, they explained. “He came up with this idea that Ed and Harry, the two goofballs from the first season’s episode ‘Hell House’, were trying to get their own pilot on the air. They assembled their own ghost hunting team (called GhostFacers) and set about filming themselves breaking into a real haunted house and getting some footage of an actual ghost. Things quickly spiral out of control and Sam and Dean Winchester wind up saving their butts.”

Wester continued: “Initially AJ and I wanted to go out and shoot some more stuff on our own … a couple days after we got back to LA we put a call in to Phil Sgriccia (producer on Supernatural) and asked if we could get permission to use the characters for some YouTube videos or something. We didn’t have anything concrete in mind, we just wanted to get back out there and play with the characters some more. I think we felt a little bit like we had our Christmas toys taken away or something! We had so much fun shooting Ghostfacers we just didn’t want it to end.”

A few days later, Sgriccia called the guys back and said the creator of Supernatural, Eric Kripke, wanted to talk with them. They ended up walking into a room full of execs from Warner Bros. and McG’s Wonderland Sound and Vision. “We thought we were in big trouble,” Wester stated. “Turns out they wanted to see if we were open to the idea of creating a web series to supplement Supernatural‘s online identity. They used a lot of big words, AJ and I nodded sagely but then once we got out of the room we did a silent pantomime of two dudes who just scored their first big-league goals.” 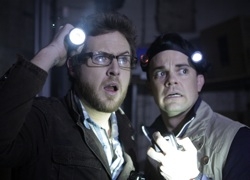 The show has been extremely popular among fans of ghost-hunting shows, but the guys wonder how actual members of the ghost-hunting community feel about the show. “I’d be interested to hear what die-hard “real” ghost hunters think about what we do,” said Wester. “Obviously when we were writing the show we tried to keep it real … EMF readings can be thrown off by wires and such, for example, something we note in the series, but we also had to make sure we were tracking the mythology established in Supernatural as well.”

In staying as true to ghosthunting as possible, some honestly ghostly moments occurred during production. “We shot portions of the show in an abandoned hospital. At about three in the morning. We were a small crew, so if you went exploring it’d be completely quiet except for your own footsteps. It was hard to write off the eerie, distant squeaks and clangs as something in the pipes or someone else in the building … it was abandoned and dead. Super creepy.”

Buckley and Wester hope that this is just the beginning of the trouble the Ghostfacers can get themselves into. “Obviously we’d love to work with cast from the show (Supernatural): Misha Collins, Jim Beaver, Jared and Jensen would be awesome to have on our turf. After more than a hundred episodes, obviously there’s plenty of ideas that can be explored further, new wrinkles to investigate and relationships to follow. There’s more than just ghosts going bump in the night and the GhostFacers team is ready to look under the bed.”

Episodes 2 and 3 of the 10 episode season of Ghostfacers are available today on CWTV.com. New episodes will post each Thursday at 10 AM, for a total of 10 episodes.