theStream.tv Loses Sponsor, Asks for Help to Save the Station 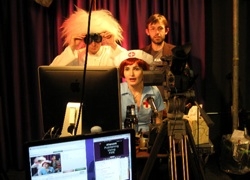 Last Thursday, founder of theStream.tv Brian Gramo went live and told the online community that he had a very important announcement to make considering the interactive web television network. Viewers in chat knew Gramo was serious when almost every host of every show on the network joined them in the room. This was either going to be very good news…or very bad news.

In the aftermath of the Twitter storm that followed, it would prove to be a little of both. Bad in the fact that Gramo announced the departure of theStream’s longtime (and only) sponsor, Evo energy drink (it was a friendly departure, due to finances on Evo’s part), as well as having to layoff his two full-time employees. Good in the fact that it forced Gramo to begin seriously considering the future of the station and begin formulating a possible business model that will lead to the longevity of the station and the community it has fostered.

“I know everyone wants to do a Streamathon and raise a lot of money to keep theStream going,” said Gramo, who I had a chance to sit down and talk to at length about the future goals of theStream. “But that’s just a Band Aid, that would keep us going perhaps another couple weeks, another month or two. I’m much more interested in coming up with something that is much more sustainable.”

“When you come in and shoot an episode, it’s costs thousands of dollars to produce. (The hosts of the various shows) don’t see that,” Gramo explained. “It costs thousands a month in rent, all our different internet connections and bandwidth, production insurance … even the menial salaries me, Chloe, and Jared were drawing … even if it’s $100 dollars a day per person, that is still thousands of dollars.” One option for how shows can assure they continue is by providing their own sponsors, such as Doc Mock’s Movie Mausoleum has done with Newgrounds. One of Gramo’s goals is to have sponsors tailored to each show, as opposed to having one overall sponsor for the entire station.

In addition, Gramo plans to implement several other long-term strategies to try and assure theStream isn’t relying on just a single source of revenue for its survival. These include upgrading the studio with benefits such as greenscreen capability, access to a jib, prompters, and HD cameras and then renting out the space for a discounted rate to independent productions to bring in ongoing emergency revenue as well as raising awareness of what theStream is doing for young producers, something that has always been important to Gramo. “I like production, I’m a production nerd. That’s why I have the show Filmnut. It’s just really what I want to do … just producing that show and being creative and working with creative people that don’t know how to get done what they want technically … it’s a great partnership.” As additional incentive, productions that utilize the studio’s resources early on will be offered the benefit of being able to lock their discounted rate for the duration of the studio’s existence.

“If we can get the studio reconfigured, we can be making a decent amount of revenue during the day to support the primetime lineup once again so people don’t have to worry about losing that one sponsor,” stated Gramo. “We were relying on one source of income and we need to be relying on multiple sources of income. Each show needs to be paying for itself and the network needs to be improving itself off the income of the rentals.”

So the short-term goal would be raising the money to go forward with the studio revamp. Fan donations are already coming in and every cent helps. “Twitter has been a great asset to theStream. People started using the hashtag #savethestream,” explained Gramo. “But theStream isn’t going anywhere, I don’t know what else to do and we have a lot of properties that can exist without that studio. A lot of the shows will continue and theStream.tv website isn’t going anywhere. So instead of the hashtag #savethestream, it should be #saveourstudio. If you go to theStream.tv/SOS, I’m putting all the information there for people to help.”

If you are in the LA area and would like to help out in a more hands on way, Gramo is looking for volunteers to help with the actual revamp, which is scheduled to take place on or before Monday, March 15th. If you are interested, you can e-mail Gramo at brian.gramo[at]thestream.tv or call 310-424-5197.