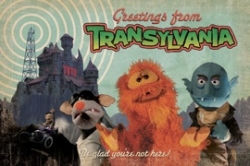 What do you do when you’re a puppet vampire and your UHF station deep in the Carpathian Mountains is being run into the ground? Why, you get the yeti Furry Ackermonster to hotwire the station’s ailing antenna to the fabled Frankenstein Device, of course! Delicious chaos will ensue!

For over two years, the independent series Transylvania Television (TVTV) has been quietly but consistently building up a loyal audience with its unique blend of comedy, horror, and puppetry (NOT for kids). Produced out of Minneapolis, MN, the series is not only about to launch its third season, but is releasing their second season on DVD including hosting a DVD Launch Party at local Falcon Heights, MN comic and game store The Source, that will include a sneak peak of a season 3 episode as well as bloopers from seasons 1 and 2. For everyone else, you can virtually attend the screening by tuning in live on Ustream starting at 1:50 PST.

In addition to the crazy antics of Ackermonster, Le Shoc, Dwayne Frankenstein and the rest of the furry staff of Transylvania Television (TVTV), the real life human crew of the show have been releasing a series of Production Diaries that shows the true glamour of producing an independent web series (including the fabulous pre-shoot diaper washings).

You can check out the first two seasons of Transylvania Television (TVTV) as well as additional Production Diaries on the show’s website. If you are in the Minneapolis area, be sure to check out the DVD Launch Celebration at The Source on Saturday, February 20, 2010 from 4 PM to 8 PM CST or live on Ustream.