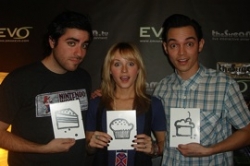 It’s a flurry of activity in the studio as guests from the Live! From the Future With Stuart Papp show linger and the crew of the RadNerd Show rush about, trying to organize media with the operations manager, preparing for sound check, going over their outline of segments with their special guest Sara Fletcher from My Secret Girlfriend. There is an electricity and excitement in the air and at the center of it all is Brian Gramo, Overlord of theStream.tv (I had to make up a title because as the space under his picture on the website states: “I don’t really have a title, but if i did… I’d put it here!”), orchestrating the transitions with the stature of someone with a combination of natural talent and years of experience.

It’s Tuesday, November 10th and it’s the premiere (or as the network calls it, the pilot presentation) of the RadNerd Show on the interactive entertainment network and the hosts of the show, Beau Ryan and Leo Camacho don’t want to leave anything to chance and are armed with extensive notes. Ryan and Camacho aren’t new to the station, having done six months of the post-show for one of the most popular shows on the network, Coin-Op TV Live. The show’s producer, Jared Greenhouse, comments on the fact that he’s never seen a show with so much media in the 10 o’clock slot, which is deemed “After Hours” and has a tendency to have a more laid-back feel.

Before the show goes live, I take a few minutes to chase Gramo around with my digital voice recorder and talk to him about TheStream.tv. “It’s TV you can yell at,” he begins. “Doing it live I don’t think is unique … we do do it live more often than most people. There’s live big budget productions and then there is all of the other stuff. There is American Idol, there is So You Think You Can Dance … I think we’re creating a quality product for our budget level, which is pretty low.”

There is also a great sense of community attached to the network as well as tons of ways for those watching to directly influence the shows. “If enough people are in the chat room yelling the same thing, we can see that and that will effect the show immediately,” Gramo explains. “It’s still at a point where it’s a really tight community, it’s not so big that we can’t give a little TLC to everyone.”

“We play interactive games,” Gramo continues. “So you’re constantly playing things and depending on how you win those games you might get a video game or a CD or a t-shirt. The Xbox 360 every month is huge. I mean, McDonalds only does that once a year even … I only do it because I think it’s cool. We’re paying for that out of our sponsor money, we don’t have a deal with Xbox. I just honestly feel like it’s an awesome gift.”

And were does the sponsor money come from? “Evo Energy Drink is the coolest sponsor ever,” says Gramo. “They essentially let me do whatever I think is the best thing to do and they have never infringed on my creative direction. And plus it’s really good and people honestly like it.”

I asked about what the process a new show like RadNerd has to go through to be a part of the network, which boasts over 30 shows on it’s roster. Explained Gramo: “I want to give every show a chance to develop a following or at least put some media together for a highlight reel. And if the fans get behind it and it gets traffic, it stays … after 8 episodes, you’re kind of on the chopping block … It’s unfortunate but otherwise there wouldn’t be room for new shows.” There are always exceptions to those rules though. “Some shows might not have a lot of hits but they bring in great guests and really serve a niche purpose so they might get to stay around a while.” A good example of this would be the most recent episode of Filmnut, which featured director of The Guild Sean Becker and jumped straight to number one most watched video slot the day it aired. Sandeep Parikh and Felicia Day visiting the chatroom and Wil Wheaton Tweeting about it during the live broadcast probably helped. 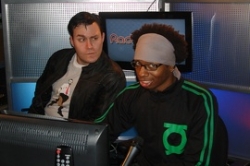 It’s now time for me to settle in and watch the live broadcast. Of course, it’s hard to settle when you can’t stop giggling uncontrollably. The show opens with a hilarious video featuring hosts from other theStream.tv shows putting Ryan and Camacho through a vigorous and slightly homoerotic bootcamp-like training process on how to properly host followed by an energetic and tightly-edited opening credits sequence. The duo then introduced their guest Fletcher, who instantly began entertaining the audience with her witty banter and dead-pan reactions to topics ranging from whether Donkey Kong or a fireman would win in a fight to her previous experience as a sign language interpreter to her love of poop and cursing (in fact, curse words were mentioned that I didn’t even know existed…the joys of live broadcast and the uncensoring of the internet). Segments included “Tuesday’s a Bitch,” about the day the guys go broke because it’s the day new video games and DVDs come out, “Issues,” which features the show’s comic book expert Damian Beurer, and “Trivia,” which, like it sounds, involves trivia questions answered by the chatroom audience. Special shout-out to Flitz, who runs the IM station for the show and is always on the ball with a clever quip. For example: “Do the curtains match the drapes?” is answered with, “hardwood floors”.

After the hour-long show, Ryan and Camacho are bright-eyed and almost trance-like in their inability to believe it went by so fast and so smoothly. “My plan was to down a whole can of Evo before the show and get really hyper and it worked,” said Camacho. “I’ve been at every TheStream studio and it originally started in Brian’s bedroom and literally the backdrop was a bedsheet. I was his third guest ever and we sat on stools and it was insane. And now look at this studio … I think this studio is bigger than G4s now.” Host of Coin-Op TV Live Robert Welkner was even on hand to congratulate his former post-show hosts. “I’m proud of them, it’s like the boys are all grown up,” he said. 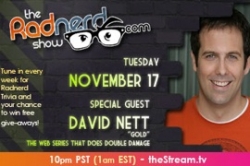 With the success of RadNerd‘s first show, perhaps other people are interested in seeing their shows on TheStream.tv. “I’m always looking for new shows,” said Gramo. “For someone who’s interested: we want a combination of something that is extremely relevant that can be presented in an entertaining way. That’s what we do here for the most part. … We don’t do sketch because it doesn’t translate well. I’m definitely looking for things that are backed by a community.”

You can catch RadNerd Show every Tuesday at 10 PM PST. Next week’s guest will be David Nett, creator of GOLD. For the chance to win the monthly Xbox360, watch The Game Show on Friday nights at 8 PM PST.