Mobile Web Series: The Network In Our Pockets

Developing digital content is much different – and often times infinitely more challenging – than creating traditional entertainment. You often have a less focused audience with multiple tabs, ads and videos competing for their attention, and even with recent reports touting longer form consumption on the rise, you still have a smaller amount of time to compel your audience and develop your characters. Not to mention pique their interest enough to return each week (or sometimes, several weeks) for a new episode. 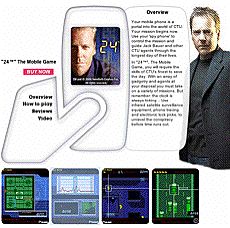 No matter how you slice it, it’s a tall order, and in a media saturated space, it’s more critical than ever to engage users at the point of consumption, which is why many content creators are exploring mobile as either a complementary experience, or an entirely made-for-mobile series. In fact, I’ve been recommending that my content creator clients include a mobile component to their web series to bridge the story transmedially and blend IRL experiences. Mobile is also an excellent vehicle for activating behaviors, especially with the array of technology available to enrich and personalize the experience, such as augmented reality and geo-location-based interactions.

Most mobile engagements to date have been developed by studios to augment their television programming and tap into a digital audience. Marc Ostrick, founder of eGuiders, was working on original scripted mobisodes as a spin-off for Fox’s 24 back in 2006 that were intended to simulate the high drama/action experience for those who wanted to watch video on their phones. A partnership Fox struck with Verizon to promote their new 3G technology spawned a pay-for-content experience, which was pretty ambitious at that time, especially considering the miniscule mobile budgets didn’t even allow for using the actual cast in the series. “But it did offer some valuable learnings,” said Ostrick. “Just because the technology is there, doesn’t mean people really want to watch TV on their cell phones unless there is something that is truly unique about experiencing mobile content than on any other medium.” 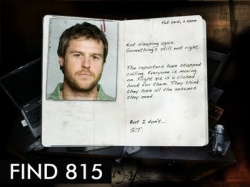 ABC caught on a bit more on that front with their intricately woven mobile ARG, Find 815 for LOST. A show like LOST with its myriad of plot lines and viewers’ ongoing quest for answers makes it the perfect subject matter for delivering unique content that is supplemental to TV viewing and merges the storyworld with real life in creating a rich story tapestry for viewers. They tapped Hoodlum to build the content, one of the leading digital entertainment shops out of Oz, whose specialty is taking the brand and brand values from existing TV series to create original material specific to mobile or web. For Lost, Hoodlum developed an intricate backstory for the discovery of the wreckage of Oceanic Flight 815. The ARG began on December 31, 2007 and ended two hours prior to the premiere of Season 4 on January 31, 2008, and was intended to keep avid fans engaged while the show was off air and grow audience participation in the lead up to the new season. It also helped offset viewer fatigue over unanswered questions by giving them clues and insights to help close the loop on parts of the storyline.

Nathan Mayfield, Chief Creative Director for Hoodlum says the key to a successful mobile enagagement is “Story first, technology second.” “We have heard it many times but that is because it is true.” Mayfield continues, “Good storytelling is at the heart of a successful project but poorly executed stories are a waste of time. With Mobile you need to ensure that the project balances game play and narrative in a way that your audience has a sense of achievement. If you do that, they will return again and again.” But he cautions content creators not to fall into the ‘if you build it, they will come’ trap. “Mobile is only one piece in a multi-platform project; you need to ensure that audiences can engage with your content across many touch points and, in ways that suit [each medium] – i.e. Mobile needs addictive short plays with immediate responses.”

NBC is also attempting to assert a leadership position in this arena with their recent foray into a fully integrated multi-platform experience for Heroes boasting some impressive initial results. Sponsored by Sprint, the campaign began on September 28, and runs through December 30, with the story unfolding across the web and mobile, giving viewers deeper character interactions and original scripted mobile content in the form of games, stories and clues for Sprint subscribers to solve a mystery and enter to win a $25,000 interactive storyline contest. The companion content has already resulted in a rise in viewership for the show, combined with several million mobile streams and hundreds of thousands of sweepstakes entrants.

So, for the most part, the networks have mobile covered as an adjunct vehicle for extending their lineup of programming and driving users to their websites to solidify brand awareness and show interaction. And the category is growing rapidly. Nielsen estimates that a whopping 10.3 million mobile phone subscribers, 5% of the total cell phone population, access video via their phone each month. 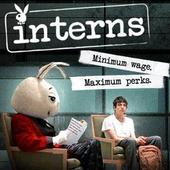 This market even spawned Playboy getting in the mobile game last year with their made-for-mobile series Interns, showcasing the behind-the-scenes world of Playboy Enterprises’ Fifth Avenue publishing headquarters as seen through the eyes of three college students. The show is available via iPhone sites, as well as across Playboy’s Audience Network, which includes Quattro Wireless, mywaves and Zannel. Several additional carriers have also begun to roll out the :90-second mobisodes this year, which were developed by Swan Haus Media. Interns elicited 1.8 million views on both the mobile and Internet platforms, and was the #1 video download on AT&T. They also self-reported an additional 50 million impressions via their MySpace microsite. According to Lisa Kolodny, Head of Your Marketing for Playboy, “We wanted to ensure that the Interns program was not only entertaining but also relevant to this target demographic, which will drive students to engage with Playboy via their mobile phones.”

On the branded front, Omelet, in partnership with Fox Mobile Studios and Altoids, recently launched Brainstorm, as an original mobile/web series, which we covered last month, so I decided to catch up with Omelet partner Steven Amato and Mike Wallen, VP of Fox Mobile Studios to learn more about their mobile strategy and why they decided to take on this medium. Steve remarked that it’s critical to consider the immediacy of the mobile web. “Time is valuable and drop off severe with mobile, so you have to make an immediate impact with every episode you create. With Brainstorm, we called it the ‘big funny’ and every episode had to have it and we had to set it up fast. 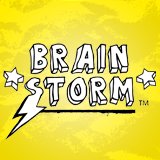 Based on the viewing habits of mobile users, it’s important to not expect viewers to watch the whole season. Each episode should work as a modular standalone experience that when viewed together in episodic form gives viewers a longer story arc payoff.” Wallen’s passion for mobile really shines through. “There’s an amazing entertainment portal in your pocket. Let the platform – its interactivity, connectivity and communal nature inspire your ideas. While it’s a great place to watch your favorite TV shows and movies, it’s an even better place to discover, share and interact with content.” And he advises fellow content creators to let that aspect inform their own mobile efforts.

Electric Farm Entertainment’s Afterworld was also developed with a mobile focus, orchestrated to create story synergies between each platform that expanded the lexicon of the story and drew viewers deeper into the vivid fictional world. The series comprised 130 x 2′ made-for-mobile episodes, all written in such a way that a story arc ran across a set of five installments. “We chaptered the video specifically for mobile platforms and we ensured our mobile game tied back into the story,” says Marie Jacobson, Executive Vice President, Programming and Production, International Networks for Sony Pictures Television who distributed the series internationally. 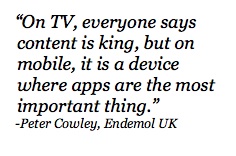 In the vein of Afterworld, an upcoming indie series Issa is in development exclusively as a mobile-delivered experience. Created by William Burden and Steve Parkford of Dreamgate 2012, a 52-episode animated series is planned, approximately 2 minutes each, with interactive elements that allow viewers to explore the intricate animated world they’ve developed and will use smartphone technology to let viewers harness the characters’ ‘special abilities’ and solve mysteries. They even tapped Afterworld’s Michael Decourcey for animation.   “Our stories must provide a complete arc—beginning, middle, (cliffhanger) end—in just 2 minutes,” said Burden. “Enough information to keep you entertained for the duration and, because we are creating a multi-episode mega-arc, also looking for more. Our whole approach is to compress the normal pace of dramatic development, while not losing key elements of character and action nuance.”

Even in cases where the mobisodic series is the main feature, mobile is strongest as part of symbiotic cross-platform encounters. With a limited amount of time to tell stories via the web, ancillary experiences that bring more of the backstory and characters to life is important to paint a complete picture. Offering mobile vignettes to connect the dots or extend a story arc will not only help enrich the experience for viewers, but will draw them into the narrative in a meaningful way. It also gives the creative greater longevity through fresh, ongoing snippets of content that can stand alone.

No discussion about mobile would be complete without addressing the app revolution. Peter Cowley, Digital MD at Endemol UK notes, “On TV, everyone says content is king, but on mobile, it is a device where apps are the most important thing.” So, creating apps that add to the depth of your series can increase consumption, viewership and affinity. Not to mention tap into the viral aspects of the space in extending the reach of your series across mobile networks.

The Future of Mobile is Now

Whatever mobile tactics you decide to employ, the time to strike is upon us. According to Paul Verna, eMarketer senior analyst and author of the new report, ‘Mobile Content: Paid Models Take Shape,’ “The expected increases in mobile Internet users, mobile data revenues and smartphone sales will produce an environment in which users will be hungry for content, and media companies with premium content are in an advantageous position to launch paid models.”

In an increasingly channel-agnostic space where the same content is available in multiple places, the key is to monetize experiences around the content, and there’s no better way to create memorable, immersive and highly personalized experiences than through transient content that travels with the viewer and that brings the story and the characters they love into the palm of their hands.