Imagine the situations a skinnier, stupider, and utterly hilarious version of Tony Soprano would get into and you’ve got a pretty good idea about what you will be getting into with Octane Pistols of Fury. The brainchild of a collaboration of Escape Pod Films and Jet Lag Productions, both groups come out of the Channel 101 New York community, so they are no strangers to short-form episodic comedy. 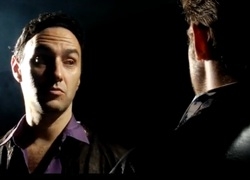 For those not familiar, Channel 101 is an online content network with a twist: each month, content creators submit show pilots that are not to exceed five minutes. Five new pilots along with the top five winning pilots from the month before are screened in front of a live audience. Based on audience votes, the top five shows get to make the next episode in their series. If the show doesn’t get enough votes, it is canceled. There are Channel 101 factions in both Los Angeles and New York and some well-known primetime shows include Yacht Rock, The Lonely Island’s The ‘Bu, and Classroom (which, in my personal opinion, is one of the very best shows to come out of Channel 101…and the only show in Channel 101 history to run for 13 consecutive months and then retired, thus never facing cancellation).

The show stars Andrew Pifko (The Godfather Video Game), Greg Stees (Vamps), Trevor Williams (Nice Brothers), and Chris Prine (Sandwich of Terror). With only one episode posted so far, which seems to end without a clear “to be continued…” feel, this could perhaps turn out to be a one-off as opposed to a full series. But the aptly-named cast of wacky characters leave a huge amount of room for exploration, so hopefully we’ll see more episodes in the near future.