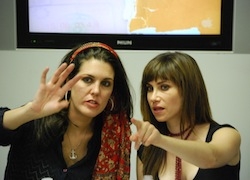 What happens when a divorcee “acquires” her ex-husband’s marketing research company and asks her best friend, a beauty editor-turned-bestselling author, to help her run it? On the surface, it seems almost plausible. But when those two best friends are Cynthia and Pillar, two of the most self-obsessed women in the San Fernando Valley area, then things get interesting…and often hilarious. Especially when you bring in actors such as David H. Lawrence (Heroes, Goodnight Burbank) and Sandeep Parikh (The Guild, co-creator-director The Legend of Neil) to play some of the crazy cast of characters that participate in the focus groups for the horrible products that result from this “acquisition”.

Groupthink was created by two cast members of Goodnight Burbank, so the writing-directing-producing-acting team of Angela Espinosa and Wendy Rosoff have a lot of web series experience to bring to the table. I had the pleasure of sitting down and talking with Wendy and Angela and wanted to know how working together on Goodnight Burbank lead to them creating Groupthink.

“Seeing what Hayden went through and how that came to be and realizing that it is something that is doable. It’s difficult, it takes a lot of passion but it was something that really inspired us”, said Angela. “Not only that but … as Hayden started writing scenes for us … we naturally gravitated towards each other as scenes started developing”, Wendy added. “We just had this uncanny chemistry together and it came out right out of the gate … and then when we started writing together it was kind of the same thing … we both had a very similar sense of humor, sense of timing and just got each other.” 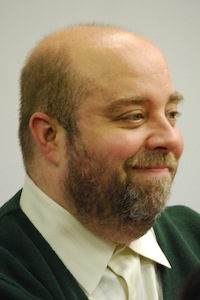 Besides the natural chemistry between the two, both women are highly trained actresses with strong backgrounds in improv. Wendy is also a dancer and choreographer…and don’t think some of those skills aren’t going to get showcased in future episodes. I have it on good authority that a hip-hop music video is in the works. “There may be some crunking”, Wendy said.

One highlight of the show is the commercials for the products that get discussed in the focus groups. Some of the products are completely created from scratch but quite a few were inspired by Wendy and Angela perusing Carol Wright Gifts. “It’s our inspiration, it’s our Bible”, said Wendy. The products will also take on a larger role in the future, with plans to integrate fan-created products. “Some of our fans have already had great ideas for future products and wanting to do commercials, so it’s a natural progression”, said Wendy.

Groupthink is currently on it’s seventh episode but Angela and Wendy have informed me that the show is planning a bit of a restructuring in the near feature. “We’re starting to talk to a lot of production companies about possibly funding the show … one of our original intentions was to build this show for brand integration,” said Wendy. Their concept centers around making a product a “hero”, as opposed to the products that the focus group tears apart.

They also plan on creating a prequel to what we’ve seen so far that fleshes out how Cynthia and Pillar ended up in this position to begin with and to add some more ancillary characters. “What we have been doing up until now is really exploring where the funny is, seeing what works, correcting, going more in that direction and we’ve really basically created a proof of concept”, said Angela. They are currently working on a 23 minute pilot, which can either be cut into 6 or 7 minute segments or left as-is.

Since 23 minutes is a traditional sitcom length, I wondered if this meant the series was looking to make itself available to make the move to television. “The web is our home”, said Angela, “That’s where we want to live. It’s where we got to play and speak our voice … we’re very lucky to be able to play and create a world where what we find funny is out there”.