Roommate comedies in some form have been dominating entertainment basically since Three’s Company, but when they work, they work. Sean and Jilly Move In is as simple as it sounds. A couple decides to move into together to save their relationship. And simple it is. So simple in fact, the actors shamelessly wear microphones placed strategically sometimes on their arms to pick up sounds from two actors at once—ah, the joys of love-budge web series making.

But somehow it is easily forgivable as Sean O’Connor and Jillian Federman have an easy, engaging, and entertaining demeanor, and you’d rather hear what they have to say, even if they are wearing microphones on their arms. 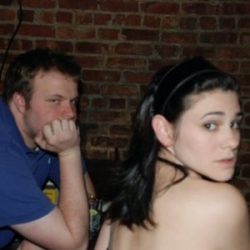 And maybe it’s because the show puts sexual tension (or lack thereof) out in the open it can focus on romantic foibles of living together in a small apartment in your 20s and 30s the success of which may simply be dependent on your apartment’s square footage.

The show was born from the brains of O’Connor, Federman and director Ralph Arend, and the actors sometimes work off a script, and sometimes simply improvise. Planned for a total of 18 episodes, it is sometimes hard to imagine the series ending in a music montage of sitcom style happiness. Much too real for schmaltz, Sean is currently dealing with losing a job, while Jilly deals with the temptation of hanging out with a former flame.

The show feels much like an expanded version of the relationship comedy Joe and Kate, although with Sean and Jilly you get the feeling the couple might be less in love, and more together for practical reasons. That said, you can’t help but root for them, especially if you’re a 20-something living with a certain someone hoping it might actually all work out.