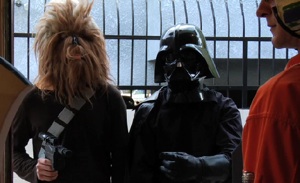 The Junior League of Superheroes (JLoSH) has all the right ingredients for the making of a fun web series experience. It just needs a little more spice. Launched last week, the show undoubtedly has studied the success of its Comic-Con worthy, nerd-friendly predecessors, ala The Guild and Dr. Horrible’s Sing-Along Blog. If history proves true, web series fans like their shows rife with costume-clad heroes and heroines who enjoy video games and fantasy. So far, Junior League of Superheroes has all of this—including cute girls in dressed like Princess Leia and R2D2.

The show’s mission statement is also admirable–“Imagine we live in a world of good and evil…where ordinary people strive to leave their mundane lives and accomplish extraordinary things. And within that world are six bumbling, wannabe superheroes who have no idea what they are getting themselves into.”

The second episode of the show seems to hit this statement on the head as we watch a group of young people at a party dressed in full costume garb hit on each other through the merits of Star Wars. If the show can embrace the mundacity of daily life through the perspective of those who think they are working to save the world, by dressing like Han Solo (without winking too much at the camera) it might be a winner.

Writer Brian Leahy stars in the series, along with director Justin Fair, Teresa Reilly, Julie Gearheard, Foster Wilson and producer Justin Davidson. To punch it up a bit, I’d suggest the creators take a cue from Cincinnati’s superhero who has donned and mask and cape to fight crimes in his city since early this spring.

If you’d like to discuss the life and times of superheroes, the cast of The Junior League of Superheroes will be screening the series at Comic Con as part of the CCI Independent Film Festival on July 25th.