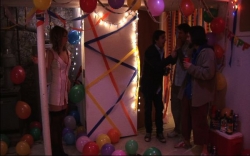 Any web series that begins with a Lebowski-esque voice over definitely grabs my attention. Guy Friends is just one of those web series. In a clear nod to Sam Elliot (in fact, I had to listen twice, these dudes are darn good impersonators) the show is always opened by a not-yet-introduced narrator who provides a simple setting and conjures up images of a man in a cowboy hat.

The homage is not surprising for a show driven by testosterone. It’s hard not to note this trio of New York comedians (Damien Luvara, Mike Thurstlic, and Dave Droxler) might be aiming to cash in on the cash cow bromances of late ala I Love You, Man, and The Hangover. But these guys also clearly understand web comedy. Each episode is leading to solve the mystery of a cheating girlfriend, specifically Bronski’s (played by a Paul Ruddian-everyman Droxler). Every show offers a few clues, and leaves the audience wondering if this still faceless girlfriend will be the Yoko to this tight band of brothers.

The show is also deftly handled by the directing pair of The Sofsky Brothers (Abhay and Halavah). The two make low budge look good, while giving the trio time to breathe within the scene, allowing the audience to get to know the characters.

Luvara describes the show as a “Sex and the City with douchebags” but he may be selling the show short. With three guys who seem like genuine friends who might live in the apartment next door, Guy Friends has the potential to appeal to both men and women as these three Muskuteers embark on their quest to rid their lives of Bronski’s cheating sweetheart.