Review: 'Out of Office' Needs Work

I hate giving bad reviews, especially when I know the makers meant well, but honestly, this show needs work. Out of Office is a bi-weekly Brit entry into web tv about a pair of business partners who have set up a virtual office by video conferencing from the comforts of home and well, that’s about all there is.

Ben Neale plays Jason, our point of view into the world. Jason is the tech-side of the start-up duo and Neale with his elastic face and bug eyes performs his tech-heavy lines competently as the aloof couch-bound nerd. Then there’s Helen, Jason’s all too congenial girlfriend (what woman is really that cool with her bf slackadaising on a sofa all day in his unmentionables?), played rather nicely by the plain-Jane-but-oddly-hot Sarah Coyle. And then the businessman of the two, David, is played by Fergus March, whose face we never get a full glimpse of as he does various personally hygenic activities on the other side of the video conference, ie, brushing teeth, exercising, getting dressed for meetings, etc. And through no fault of March’s own, what he’s doing is as banal as it sounds.

And frankly, I think that’s the main problem with the show. It’s relatable to the point of being boring. Jason spends most of series in some form of pajama or boxers-slash-t-shirt combo typing on his computer, exemplifying the work-a-day informality of the internet entrepreneur’s lifestyle. And though this quasi-slacker zeitgeist is obviously the bread and butter of the concept, it’s really not exploited to any creative effect.

I’ll amend that a little bit by saying that the fourth episode (below) of the series ventures a little deeper into creative territory with a stain removing technique that will make you shiver. Unfortunately, it feels out of character for Jason to do any of what he does to remove the stain. Not to mention, I think there’s a limit to the amount of bodily fluids one joke can sustain…especially when neither of which involved are all that funny.

Mike Smith, the writer, has a history in IT and it’s quite clear he knows what he’s talking about when he has Jason wax rhapsodic on issues from creating code to the infinite value the web has for the human race. However, his sense of drama and/or comedy needs some brushing up. Jokes either land flat, or are non-existent; stories with beginnings, middles or ends are hard to come by; and there isn’t an ounce of subtext to be found anywhere: what you see is what you get. 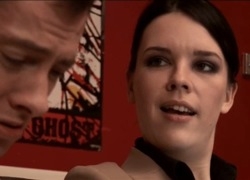 On the flip side, the production is strong. And director Mike Holt does a fine job with what he has to work with, actually making a show about a couple of guys that are sitting around doing little more than talking to computers somewhat watchable. There are subtle camera moves, good performances (the funny could be ramped up), and generally a good, professional look to the whole thing.

So, that brings us back to the writing. At generally five to six minutes per episode, they are feeling too long and that’s a mark of nothing happening in the story. And though one could argue that there isn’t much drama that can happen with people just staring at a computer, I have two words for you: The Guild. So, okay, we get it, working at home means you can brush your teeth, wear your underwear and talk to your girlfriend while ‘in the office’…now tell us something new, because this show is getting old before it’s even had a chance to tell us anything.