'Feed Me Bubbe' Clocks Three Years of Making Us Jealous 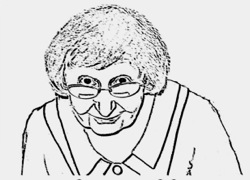 Starting a web show is not easy. Gaining a following is even more difficult, but Feed Me Bubbe, the three year-old cooking show with an emphasis on kosher food and good old-fashioned family traditions, has done both and is a quintessential example of how new media is changing the world.

Now, there are many quality cooking shows out on the web. Series like Le Gourmet TV, aim to cover the whole menu with everything from baking recipes to spirits. Tubefilter News recently covered Great Depression Cooking, which features Clara, a 93-year-old great-grandmother and who lived during the Great Depression whipping up simple family favorites.

Here’s where Feed Me Bubbe is different: according to 25-year-old Avrom Honig, the series’ creator, director, and producer, the show’s fame was an accident. It all started one night in 2006 at the dinner table with Honig and his father while they were eating Bubbe’s food. Honig wanted to put together a podcast to act as a demo reel and show off his talent. 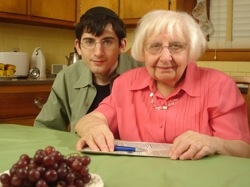 “My father was like, y’know, Bubbe’s food is so delicious and so amazing, why don’t you share that with the world?” said Honig “He said, ‘Why don’t you call the stupid thing, Feed Me Bubbe?’”

Something unexpected happened with that demo reel: after it was uploaded, emails poured in from the Atlantic to the Pacific. People from America, Japan, even Hong Kong, loved Feed Me Bubbe.

Some cooking shows focus solely on the recipes and as a result, feel a little cold even if they are efficient. Feed Me Bubbe doesn’t have that problem. Thanks to its colorful, warm host, appearances by the director and the show’s production assistant “Zadi” (in Yiddish, short for Zaideh which means grandfather. You can guess his relation to Honig), viewers are left with a feeling that they too are a part of the family.

“We get emails saying, ‘Y’know, can we adopt you? When we see you sitting in the kitchen it feels like we are in our grandmother’s kitchen…” said Bubbe.

Bubbe, who is in her 80s, also takes time to write back as many fans as possible and even takes telephone calls. Since its launch, the show has seen the lens of ABC World News and felt the pen of The Wall Street Journal.

That is the power and beauty of new media. When you get together the right factors, what once was a complicated, long line of red tape to even get the blessing of local airtime, has become a simple matter of making a web series attractive and accessible. If one provides quality content with intriguing characters, success could be only a click away.

With three years of episodes, you might want to catch up on Feed Me Bubbe at blip.tv, then head to their online store for T-Shirts and even a Bubbe ringtone. Feed Me Bubbe episodes are also close-captioned for the hearing-impaired at ProjectReadOn.com.