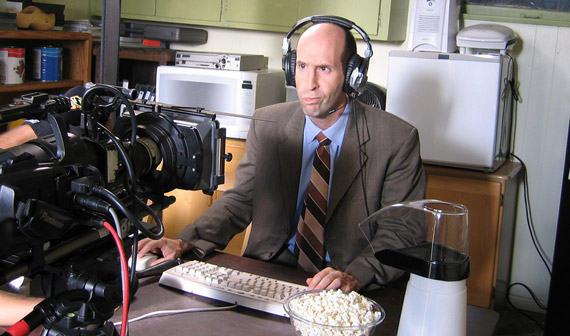 Jeff Lewis on the set of The Guild, which launches May 19 on DVD

UPDATE: Credible sources in The Guild camp have informed us that both Felicia Day and Amazon.com are very happy with the DVD and VOD deals in place, and that the deal that was negotiated was not a standard CreateSpace agreement. [Ed. Note – We’re very happy for Felicia and her entire team – their pioneering efforts have opened inumerable doors for web television creators, and we applaud them for their continued innovation in the space.]

No one said monetizing web television in 2009 would be easy — after all, traditional television revenue models are falling flat in this down economy too. Whether it’s an advertising rev-share with a web television network, a product integration deal, or a flat out sponsorship, the truth is, web television shows still haven’t found their legs when it comes to braving the Sea of Monetization, and unlike the film and television industries, no one is eager to boast about how much, or even if they’re making money in web television, so more often than not, creators don’t really know what to expect. 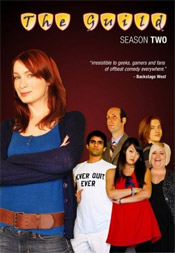 Which is what makes the impending release of The Guild Seasons One and Two on DVD so fascinating. Arguably one of the most popular web series of the last two years, The Guild, which landed a sponsorship deal with Microsoft and Sprint last fall (and took home several Streamy Awards), was distributed by its creators on hand-shipped DVDs for almost an entire year. Now, using print-on-demand technology powered by CreateSpace (the company responsible for the Dr. Horrible’s Sing-Along Blog DVD), Season One and Two of the The Guild are available for pre-sale exclusively on Amazon.com, packed with additional DVD-only content including gag reels, cast interviews, commentary tracks, behind-the-scenes and audition footage, table read footage, fan art, hidden “Easter eggs” and a PDF of the Season Two script. As of April 22, the DVDs of Season One and Two are listed at #1,720 and #2,907 on the Amazon Sales Rank charts. Not bad for Day One.

What really fascinates me, however, is how little money the creators might actually be making. Each season’s DVD pre-sells for $12.99. Assuming the deal that Felicia and her team signed with CreateSpace is standard, here’s what they’re going to make:

That’s two-dollars and twenty cents of gross revenue per unit sold, and they still have to pay AFTRA pension and health, as well as talent royalties (if any) out of those dollars.

Contrast that to the major television and film studios, who are making almost two-thirds gross profit on every DVD they sell, and you’ll start to notice how important economies of scale are in the entertainment business.

Assuming The Guilds’ deal is similar to the one Joss Whedon made for Dr. Horrible, Mutant Enemy Productions is only making $.82 for each DVD sold on Amazon. I don’t know about you, but that doesn’t sound like a money-making enterprise to me. The Video on Demand deal is better — the creator gets 50% of the purchase price — but we’re still talking about 50% of a five-dollar sale.

So, where is the money in web television? Maybe it’s in licensing. But, in order to license your content, you must create scarcity, which in turn requires you to stop giving away your content for free. I know that doesn’t sound like fun, and I know that it doesn’t gel with the spirit of the craft, but if we’re going to make web television a viable medium in its own right, we must collectively start paying attention to the economics of content — and the economics of content, just like the economics of automobile manufacturing, dictate that demand always trumps supply. And right now, there is a lot more supply than there is demand.

This is part one of Following the Money, a three part series on the monetization of web television content. Sound off below and let us know your thoughts about how you make money as a web television creator.